The Dock Of The Bay (compilation album) by Otis Redding 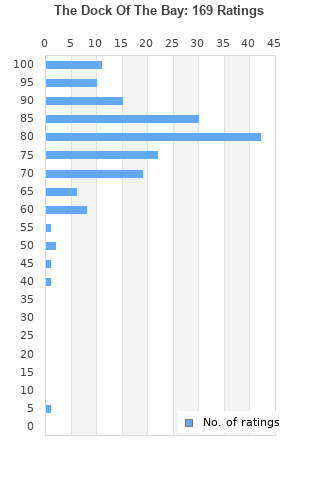 OTIS REDDING*SITTIN' ON THE DOCK OF THE BAY*UK STAX*CLASSIC SOUL*MINT-
Condition: Used
Time left: 1h 15m 53s
Ships to: Worldwide
£27.00
Go to store
Product prices and availability are accurate as of the date indicated and are subject to change. Any price and availability information displayed on the linked website at the time of purchase will apply to the purchase of this product.  See full search results on eBay

The Dock Of The Bay is ranked 2nd best out of 21 albums by Otis Redding on BestEverAlbums.com.

The best album by Otis Redding is Otis Blue / Otis Redding Sings Soul which is ranked number 375 in the list of all-time albums with a total rank score of 5,222. 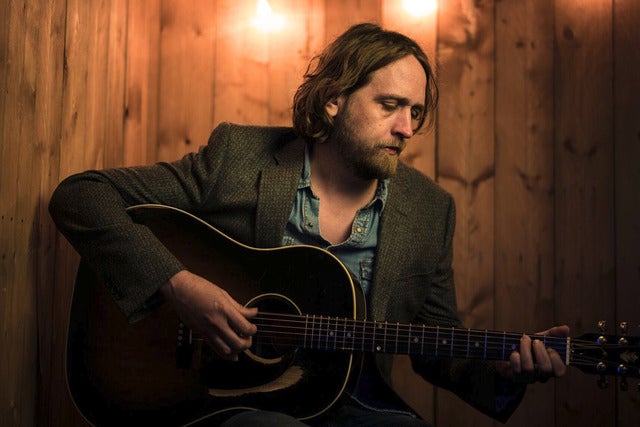 Listen to The Dock Of The Bay on YouTube 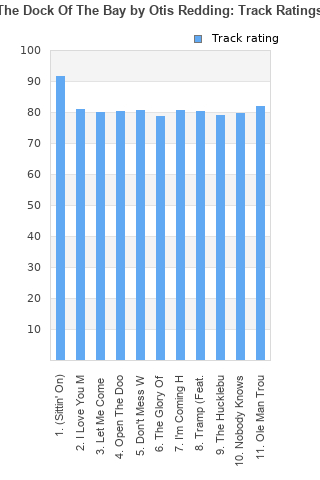 The Dock Of The Bay rankings

The Dock Of The Bay collection

The Dock Of The Bay ratings

Rating metrics: Outliers can be removed when calculating a mean average to dampen the effects of ratings outside the normal distribution. This figure is provided as the trimmed mean. A high standard deviation can be legitimate, but can sometimes indicate 'gaming' is occurring. Consider a simplified example* of an item receiving ratings of 100, 50, & 0. The mean average rating would be 50. However, ratings of 55, 50 & 45 could also result in the same average. The second average might be more trusted because there is more consensus around a particular rating (a lower deviation).
(*In practice, some albums can have several thousand ratings)
This album is rated in the top 2% of all albums on BestEverAlbums.com. This album has a Bayesian average rating of 80.4/100, a mean average of 80.4/100, and a trimmed mean (excluding outliers) of 80.9/100. The standard deviation for this album is 10.8.

The Dock Of The Bay favourites

The Dock Of The Bay comments

The real highlight of this album is the vocal performance which is consistently phenomenal throughout and it truly is one of the best voices in history. The title track does carry this album as you imagine however but there are some hidden gems that are very enjoyable as well. Most songs you can tell are a little incomplete or feel a little empty and that does weaken the album. Overall, a lot of great potential present on the record and it is such a shame we can never see this be fully realised but we should feel lucky and blessed we got to experience the small amount of content we got from this incredible artist.

Ole Man Trouble and Tramp are pretty good, but (Sittin' On) The Dock Of The Bay is easily one of the top 10 songs ever written.

I could listen to the song "Dock of the Bay" all day long...

This album should be in the top 500 in my opinion.

The Dock of the Bay is the first of a number of posthumously released Otis Redding albums. It contains the classic title track it contains a number of singles and B-sides.

"The Dock of the Bay" which was Otis first nummer one hit-single, sad after his death, indicated that Redding was widening his musical influences, and the song is not very strictly based in the blues patterns which most of his songs were. It very sad that Redding died so young and was never given the opportunity to follow this new exciting direction.

There are several other fine songs on this album, but the title-track is the immortal classic.

"I Love you More than Words Can Say" is a great soulful ballad written by Eddie Floyd and Booker T. Redding himself was the co-writer of the bluesy "Let Me Come on Home", which has some very nice guitar licks, which is not very often found on Redding's recordings.

Another great ballad is "The Glory of Love", which was written by Billy Hill.

Another favourite is the closing track "Ole Man Trouble", which was written by Redding and which dates back to 1965.

"Tramp" which is a duet with Carla Thomas shows a more informal and humorous side of Redding.

Sitting on the Dock of the Bay has to be one of the all-time great tracks for empathy. You can really imagine the lack of direction, sense of loss, and searching for hope. You can see yourself sitting there with him watching time roll away. What a craftsman with his voice.

I just listened to this yesterday, only to find out it wasn't on our charts, and the next day, it's on :). Ironic. Nice album, bit empty though.

Your feedback for The Dock Of The Bay