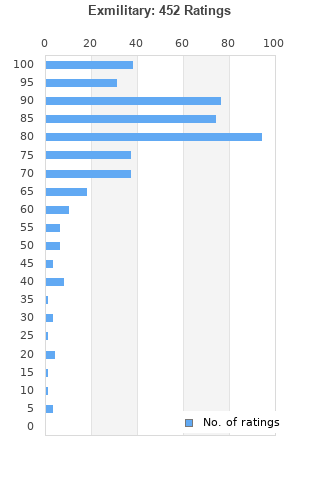 Exmilitary is ranked 2nd best out of 13 albums by Death Grips on BestEverAlbums.com.

The best album by Death Grips is The Money Store which is ranked number 201 in the list of all-time albums with a total rank score of 9,030. 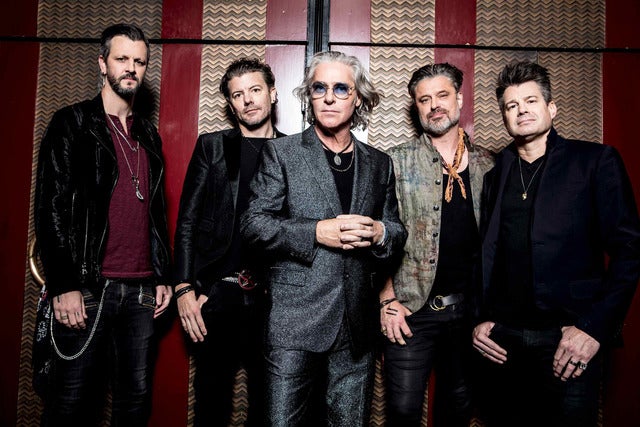 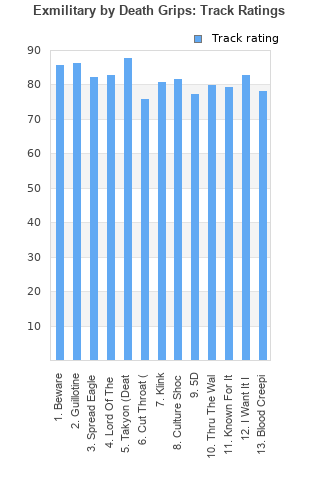 Rating metrics: Outliers can be removed when calculating a mean average to dampen the effects of ratings outside the normal distribution. This figure is provided as the trimmed mean. A high standard deviation can be legitimate, but can sometimes indicate 'gaming' is occurring. Consider a simplified example* of an item receiving ratings of 100, 50, & 0. The mean average rating would be 50. However, ratings of 55, 50 & 45 could also result in the same average. The second average might be more trusted because there is more consensus around a particular rating (a lower deviation).
(*In practice, some albums can have several thousand ratings)
This album is rated in the top 1% of all albums on BestEverAlbums.com. This album has a Bayesian average rating of 81.0/100, a mean average of 79.4/100, and a trimmed mean (excluding outliers) of 81.2/100. The standard deviation for this album is 16.4.

Easily one of the best albums of the 2010s and my favorite Death Grips album.

Exmilitary is slower paced than subsequent Death Grips releases but maintains their viscerality (is that a word?). They were pretty far ahead of the curve.

Fav. Tracks: Guillotine, Known For It.

The best death grips project. Amazing use of samples and raw and unruly vocals and song topics. Also, the albums flow from track to track is immaculate and crafts a journey for the listener with non-stop excitement from track to track.

Death Grips did something interesting with hip-hop that still holds up, maybe even more than it did when it first came out.

A solid debut that gives an idea of where Death Grips would be headed with their artistic style. The album has some of the idiosyncrasies that have become essential to the Death Grips culture but it's also a product of its time. As anyone who has ever listened to them would tell you, Death Grips loves samples. Over time, they have become legendary samplers but it is evident on this project that they weren't always the masters that they are now. I say this because I feel that they become too reliant on what they are sampling at points on the album, most notably on "I Want It I Need It". However, ironically, "Spread Eagle Cross the Block" is my favorite song on the album, one, because I've always loved "Rumble" and, two, because I saw it as a combination of an homage to the movement the song started and as a statement from them saying that they're starting something new. The lyrical content is as convoluted and morbid as we've come to expect but it seems much more crisp on later projects. As a whole, the creativity is there but it is clear that experience is a crucial motivator of Death Grips' success.

The great things about The Money Store are clearly not yet on this album. Like most mixtapes it relies too much on the samples, which are songs with a normal time signature, which forces MC Ride to rap in a normal rhythm too. Except for “Guillotine” of course, but the production is so thin there. But all in all, this mixtape gives a great introduction to Death Grips, and you could hear from this point that they were going places.

Ex-miltary is about equal parts terrible and great with songs like "Lord of the game" making it memorable.

Influential and brash, noisy without being off-putting, but the constant aggression throughout "Exmilitary" isn't pointless - just look at the well thought-out lyrics to "Klink". Anyway, I really enjoyed this record/mixtape and it's clear that Death Grips are some sort of pioneers in the genres that they work with.

Your feedback for Exmilitary