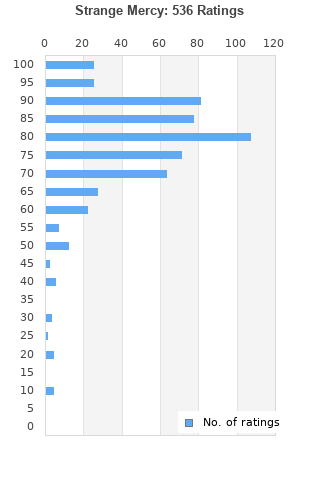 Strange Mercy is ranked 2nd best out of 8 albums by St. Vincent on BestEverAlbums.com.

The best album by St. Vincent is St. Vincent which is ranked number 454 in the list of all-time albums with a total rank score of 4,188. 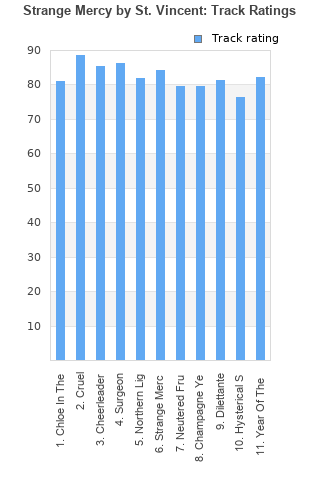 Rating metrics: Outliers can be removed when calculating a mean average to dampen the effects of ratings outside the normal distribution. This figure is provided as the trimmed mean. A high standard deviation can be legitimate, but can sometimes indicate 'gaming' is occurring. Consider a simplified example* of an item receiving ratings of 100, 50, & 0. The mean average rating would be 50. However, ratings of 55, 50 & 45 could also result in the same average. The second average might be more trusted because there is more consensus around a particular rating (a lower deviation).
(*In practice, some albums can have several thousand ratings)
This album is rated in the top 2% of all albums on BestEverAlbums.com. This album has a Bayesian average rating of 78.8/100, a mean average of 77.5/100, and a trimmed mean (excluding outliers) of 78.9/100. The standard deviation for this album is 14.9.

A fantastically written record with so many brilliant lyrics that keep us entertained throughout. The themes are consistent as well and link together nicely to create a cohesive album in terms of song writing. Musically, it is great in places as well with the first 3 tracks being just amazing. After that we get a few more excellent instrumentation performances but they are a bit more scattered around. It does slow down nearer the end though and lacks the consistency to maintain the sound for the full run time. Overall, this is an album that shows so much potential and is very enjoyable to look into.

The quintessential St. Vincent record, if there can even be one.. considering Annie keeps changing what St Vincent is with every album. But for me, this album will always represent St Vincent in her core element and its my favourite record of hers.

Annie Clark delivers a more hard-hitting and thematically coherent album than Marry Me and Actor. She puts a lot of difficult-to-face subjects like the condescending roles of housewives, depression, and both subjects' eventual succumbing to barbiturate use mixed with alcohol.
I think she has more potential musically though. We get some cool licks in this album and an occasional solo, but this feels much more like a songwriting-oriented album than Annie really showing off her guitar talents. The effects on the instrument keep the listener's interest, but it, paired with the more compressed drumbeats, sound more synthetic than organic. Thinking about it, maybe it goes along with the theme of drug use putting a user in a more drunken stupor?
Either way, this is a great listen, especially in the wake of more feminist movements and in midst of a huge push for equality.

This is an excellent album (based on two listens so far). Thematically coherent with a very strong set of songs. I'm currently particularly taken with Dilettante - or at least the last 50 seconds of it which are stunning while being hauntingly familiar.

The pinnacle of art pop. But then Grimes came and raised the bar once again. But it’s not a race; they both made great music.

Her best album. The title track is incredible.

I think, Strange mercy, is her best record, at least to date, and this is her strongest set of songs. Of course, she is an artist who could still yet to release her greatest album, but for me, at this moment, this is her best.

Still Annie's best, an album that is both geniunely moving and often beautiful, almost shoegazing it's style which adds to her typically cerebral, oblique guitar-based art rock. It's also the first album that seems less veiled in overworked experiments and esoteric references that occasionally made St Vincent's albums seem too cold or even a bit condescending; it feels more personal, even with her usual abrupt and sometimes brutal tone shifts and use of heavy metaphor, as well as her most self-deprecating. And nothing represents her twin knockout punch of melancholic beauty and can-barely-restrain-the-crazy as the combination of "Champagne Year" and "Dillentate".

I love this record, excellent guitar playing, beautiful vocals, and Annie's most honest and moving lyrics yet.

Your feedback for Strange Mercy