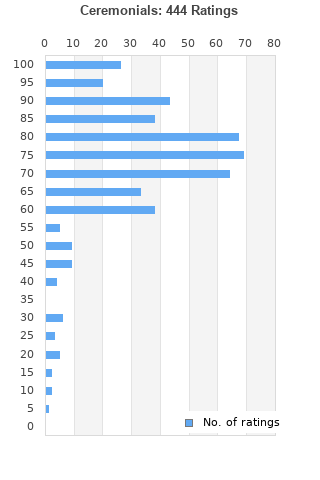 FLORENCE + THE MACHINE - CEREMONIALS NEW VINYL RECORD
Condition: New
Time left: 5h 17m 9s
Ships to: Worldwide
$47.90
Go to store
Product prices and availability are accurate as of the date indicated and are subject to change. Any price and availability information displayed on the linked website at the time of purchase will apply to the purchase of this product.  See full search results on eBay

Ceremonials is ranked 2nd best out of 5 albums by Florence + The Machine on BestEverAlbums.com.

The best album by Florence + The Machine is Lungs which is ranked number 651 in the list of all-time albums with a total rank score of 2,917. 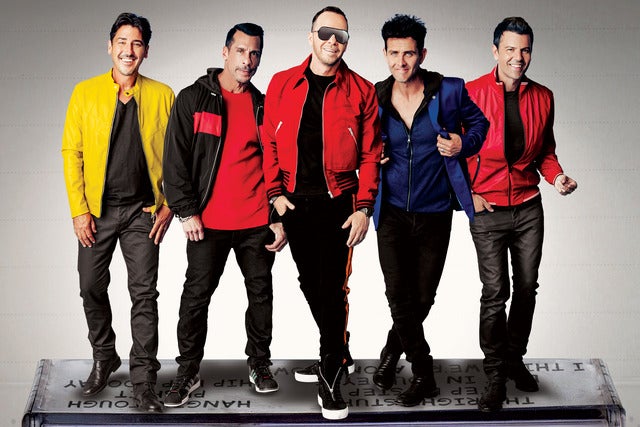 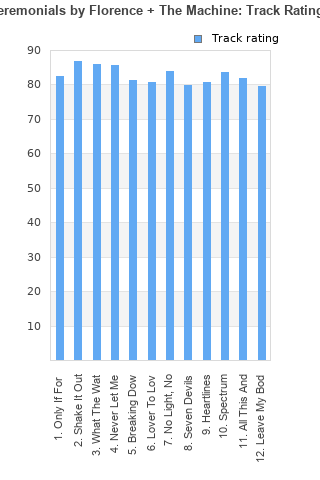 Rating metrics: Outliers can be removed when calculating a mean average to dampen the effects of ratings outside the normal distribution. This figure is provided as the trimmed mean. A high standard deviation can be legitimate, but can sometimes indicate 'gaming' is occurring. Consider a simplified example* of an item receiving ratings of 100, 50, & 0. The mean average rating would be 50. However, ratings of 55, 50 & 45 could also result in the same average. The second average might be more trusted because there is more consensus around a particular rating (a lower deviation).
(*In practice, some albums can have several thousand ratings)
This album is rated in the top 24% of all albums on BestEverAlbums.com. This album has a Bayesian average rating of 74.7/100, a mean average of 73.4/100, and a trimmed mean (excluding outliers) of 74.8/100. The standard deviation for this album is 17.1.

Such an amazing voice with powerful use of instruments, backing vocals and lyrics. This album shines to me as their best but Lungs and How Big... are also great. 'The darkest hour is always just before the dawn' Brilliant!!

Favorites: Only If For a Night, Shake it Out, Never Let Me Go, Breaking Down, Lover to Lover, All This and Heaven Too.

Kinda sounds like a lot of extras from "Lungs", but still weaved together very well. Emotional for sure. 7/10

Lungs already made it look like the Tower of Babel was child's play, Ceremonials doubles down- and is even bigger, louder, more bombastic and exponentially expands Lung's already massive life & death & everythingafter themes. It's an album that reaches for... everything... and never actually stops to let us realize why it's all worthwhile. Ceremonials has a gigantic rallying cry and it certainly sounds like something Really 'Effin Important, but what where we supposed to get out of this? Clearly it's emotions are big, but they feel reflective rather than lived-in. Metaphors about water, celebrations and out-of-body spirits run rampant, but they can alternately feel too redundant and too oblique for their own good. I don't like to chide an album for being too ambitious, but Ceremonials as a whole is just way too breathless and arduous of an experience to really let it's songs stick and resonant on a deeper level...

... that being said, a lot of it's individual moments still shine. The first third of the album is often marvelous, doing an accessible expansion of her gospel/orchestra-tinged style of indie mega-pop. If it spread that energy over the course of the album and actually connected it with some substantive, more relaxed songs inbetween it could have had quite the impact. Ultimately it only tries to top that level of volume and bombast with nearly every. single. song.

Guess all I can say is Ceremonials is friggin' exhausting, but even if it was a bit of a chore to get through I still enjoyed it, even if it's not something I ever want to return to in it's entirity. Best to savor the already massive individual triumphs.

Great follow up that does everything on her debut better. Her best album so far and certainly a classic. One of the best of the decade.

I LOVE this album!! One of my fav ever!!
She has an amazing voice and I think she is a great songwriter.

The album takes you in a journey. Is very unique and powerful.

I think it's simply touching. Never get tired of this album

Your feedback for Ceremonials