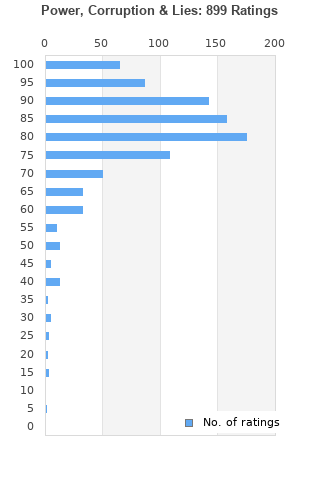 New Order - Power Corruption And Lies [New CD] Oversize Item Spilt, With DVD, Wi
Condition: Brand New
Time left: 8h 48m 26s
Ships to: Worldwide
$97.97
Go to store
Product prices and availability are accurate as of the date indicated and are subject to change. Any price and availability information displayed on the linked website at the time of purchase will apply to the purchase of this product.  See full search results on eBay

Power, Corruption & Lies is ranked as the best album by New Order. 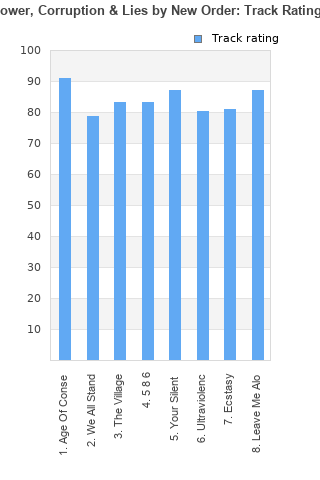 Rating metrics: Outliers can be removed when calculating a mean average to dampen the effects of ratings outside the normal distribution. This figure is provided as the trimmed mean. A high standard deviation can be legitimate, but can sometimes indicate 'gaming' is occurring. Consider a simplified example* of an item receiving ratings of 100, 50, & 0. The mean average rating would be 50. However, ratings of 55, 50 & 45 could also result in the same average. The second average might be more trusted because there is more consensus around a particular rating (a lower deviation).
(*In practice, some albums can have several thousand ratings)
This album is rated in the top 1% of all albums on BestEverAlbums.com. This album has a Bayesian average rating of 81.8/100, a mean average of 80.9/100, and a trimmed mean (excluding outliers) of 81.9/100. The standard deviation for this album is 14.2.

A number of catchy rhythm tracks, but nothing really stood out.

Power, Corruption, & Lies sees New Order inching further away from their old sound in Joy Division. They ease you into it by starting with a straight post-punk song and the album slowly morphs into a synthpop project. Pretty great. Every song is enjoyable, definitely worth a listen.

You can still hear pangs of their previous band on this record, but more clearly moving towards synths.
Overall a great mix of the two sounds as New Order continues to evolve. Definitely one of my favorite albums in the New Order discography. Leave Me Alone is my all-time favorite New Order song.

Favorite tracks: Leave Me Alone, Age of Consent, Your Silent Face, The Village

I never remember anything beyond Age of Consent but that's ok

New order tries to reach a new sound, on wich they suceed, but the end result don't compares with Joy Division, and only reaches that niche of new wave bands, Depeche, Duran, Blondie, never growing out of It to be their own thing.

First I wanna say I think it’s really respectful that they changed the band name.
You can hear they went slightly into a different direction with this new band, rather synth pop than new wave.

Your feedback for Power, Corruption & Lies