The Only Fun In Town (studio album) by Josef K 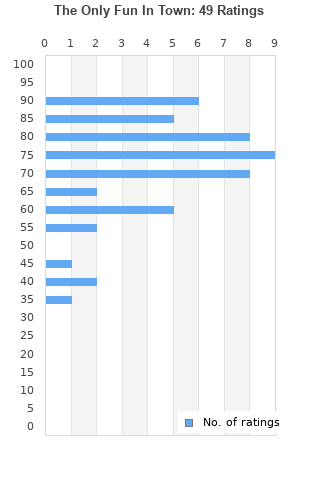 The Only Fun In Town is ranked as the best album by Josef K.

Listen to The Only Fun In Town on YouTube 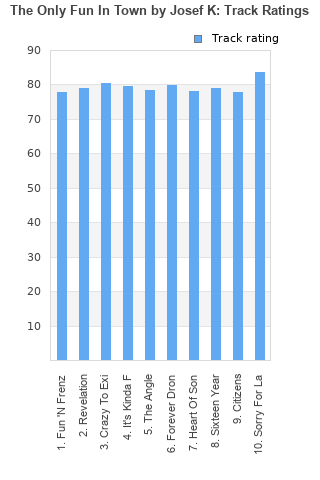 The Only Fun In Town rankings

The Only Fun In Town collection

The Only Fun In Town ratings

Rating metrics: Outliers can be removed when calculating a mean average to dampen the effects of ratings outside the normal distribution. This figure is provided as the trimmed mean. A high standard deviation can be legitimate, but can sometimes indicate 'gaming' is occurring. Consider a simplified example* of an item receiving ratings of 100, 50, & 0. The mean average rating would be 50. However, ratings of 55, 50 & 45 could also result in the same average. The second average might be more trusted because there is more consensus around a particular rating (a lower deviation).
(*In practice, some albums can have several thousand ratings)
This album has a Bayesian average rating of 73.6/100, a mean average of 73.7/100, and a trimmed mean (excluding outliers) of 73.7/100. The standard deviation for this album is 12.5.

The Only Fun In Town favourites

The Only Fun In Town comments

They certainly had a unique and highly influential guitar sound, (the Wedding Present for example owe them a huge debt), but it's not exactly jangly, its a bit more angular and post-punk like Gang of Four. And on a few songs at a time, this is utterly thrilling, but over the course of an entire album it gets a bit tiresome. Paul Haig's vocals are excellent and it would be good if they had been a bit higher in the mix on this album. (They are on the slightly more poppy alternate production version, which wasn't released until years later). But neither version of the album really captures the energy of the singles. While 'Sorry for Laughing' and 'It's Kinda Funny' are their classic songs, check out the single versions on the compilation 'Young and Stupid' instead of these versions.

I just got into Josef K and I love the energy on this album! It's a ton of fun. Also, as with so many post punk bands of this era, there's some really cool bass work on this thing.

I love the cover artwork. I love the jangly guitars. I love Postcard Records.

Your feedback for The Only Fun In Town