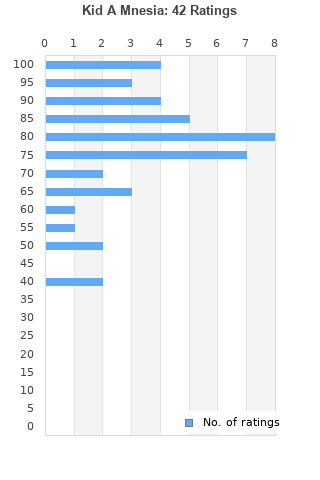 Kid A Mnesia is ranked 18th best out of 22 albums by Radiohead on BestEverAlbums.com.

The best album by Radiohead is OK Computer which is ranked number 1 in the list of all-time albums with a total rank score of 88,550. 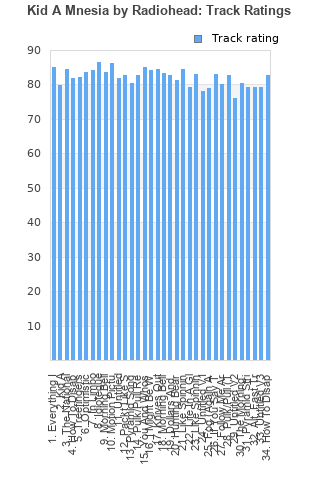 How To Disappear Completely
Rating: 89 (16 votes)Comments:

Rating metrics: Outliers can be removed when calculating a mean average to dampen the effects of ratings outside the normal distribution. This figure is provided as the trimmed mean. A high standard deviation can be legitimate, but can sometimes indicate 'gaming' is occurring. Consider a simplified example* of an item receiving ratings of 100, 50, & 0. The mean average rating would be 50. However, ratings of 55, 50 & 45 could also result in the same average. The second average might be more trusted because there is more consensus around a particular rating (a lower deviation).
(*In practice, some albums can have several thousand ratings)
This album is rated in the top 6% of all albums on BestEverAlbums.com. This album has a Bayesian average rating of 76.4/100, a mean average of 77.4/100, and a trimmed mean (excluding outliers) of 77.4/100. The standard deviation for this album is 15.0.

The alternate versions and outtakes they were able to find do not compete with the B-side material from OK Computer OKNOTOK 1997 2017. Not using Amnesiac's B-sides is a missed opportunity as well. The Kid A Mnesia is still fine though.

I think Radiohead had already released everything worth listening to from the Kid A / Amnesiac sessions. The third disc of this consists of the most nonessential Radiohead scraps I've heard since the HTTT b-sides.

@ IndieShins I think this album should be included on the site as it is a compilation album, even though I see why some might regard it as a reissue. Same is true with OK Not OK.

Why is this a separate album? Whatever I guess, but I just feel like it will get bumped for being Radiohead even though both albums are already on here separately. Sure, it's got extra material, but so do a lot of special editions that aren't on here. To the music itself - Kid A is a masterpiece, and Amnesiac has a bunch of great songs along with some of Radiohead's most meandering. The latter is still a great album, it's just a bit disjointed and not as consistent as their best albums.

I love Kid A and Amnesiac, but I feel that some of the extra material was a little unnecessary. The instrumental material at the end is great though!

This is just radiohead at their finest, all these songs are just perfect. The whole album+ KID A and Amnesiac just create this ominous, haunting, passionate, brutal but at the utter most beautiful sonic soundscape. Can’t really describe it any other way im at loss for words. It’s simple amazing all the tracks flow like ive never heard before. The rythm. The strings. The strings theyre something else. One type of instrument creates this incredible sonic fog that encapsulates u for the duration of the album. At times its very cold but at the same time intimate. Sometimes its Grande and the music really represents the cover art of KID A but somtimes it caltures and puts u at bay in this very enclosed almost claustrophobic landscape just like the crying minotaur and the very polarizing colours of Amnesiac. Radiohead truly is the soundtrack of my life Nothing beats this. Nothing does… Hauntingly Beautiful

Your feedback for Kid A Mnesia