The Best Of (compilation album) by Radiohead 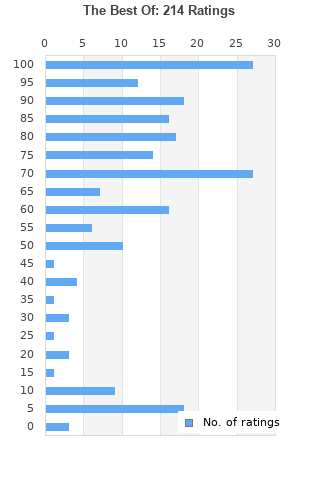 Hail to the Chief by Radiohead CD
Condition: Very Good
$7.49

The Best Of is ranked 16th best out of 22 albums by Radiohead on BestEverAlbums.com.

The best album by Radiohead is OK Computer which is ranked number 1 in the list of all-time albums with a total rank score of 88,550. 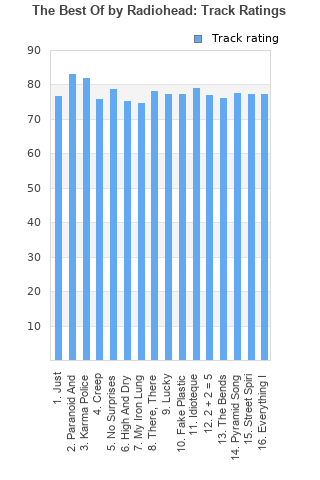 The Best Of rankings

The Best Of collection

The Best Of ratings

Rating metrics: Outliers can be removed when calculating a mean average to dampen the effects of ratings outside the normal distribution. This figure is provided as the trimmed mean. A high standard deviation can be legitimate, but can sometimes indicate 'gaming' is occurring. Consider a simplified example* of an item receiving ratings of 100, 50, & 0. The mean average rating would be 50. However, ratings of 55, 50 & 45 could also result in the same average. The second average might be more trusted because there is more consensus around a particular rating (a lower deviation).
(*In practice, some albums can have several thousand ratings)
This album has a Bayesian average rating of 65.4/100, a mean average of 65.1/100, and a trimmed mean (excluding outliers) of 65.1/100. The standard deviation for this album is 30.0.

The Best Of favourites

The Best Of comments

Got this. Discovered a lot of songs on it from albums I didn't really have any intention of buying. Loved the songs. Bought the albums. Then loved most of the albums. Some not so much. That's why some of us purchase 'Best of' albums first. Sometimes it works. Sometimes it doesn't.

This 'best of' ensured that I came into contact with Radiohead, but I discovered that this was a very commercial move of EMI. There are no songs from In Rainbows on it that came out two years before this collection. EMI wanted to cash quickly and with that idea the album has decreased in emotional value.

Fuck best-of albums and fuck this in particular. Radiohead did not want to release it, and frankly it's really not needed. Go listen to any of their albums, you'll find something for you, it's better than this garbage that's for sure.

The best of Radiohead would in reality consist of:

90% of everything from The Bends through to In Rainbows;
A selection from A Moon Shaped Pool, a couple from each of the (current) bookend albums;
A load of B-sides that didn't even make it to these.

In summary, this is why everyone buys their albums.

You guys are missing the point. Best of's aren't made for fans with all the albums. Best of's are made for people that don't have the albums but want to know what all the hype is about. People that want to check out a single disc to see if they like it before they spring for a whole discography. From that standpoint, this is a very effective compilation. It was the first Radiohead album I owned. After I warmed up to it I started getting the others and now have them all.

"Best Of" albums are pure evil. Band didn't even want this alvum exist.

An abomination to what Radiohead stands for. Especially since it was released against their will.

Your feedback for The Best Of