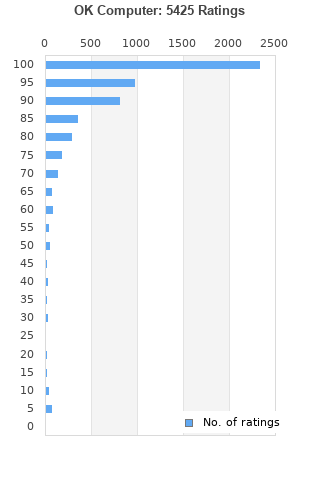 OK Computer is ranked as the best album by Radiohead. 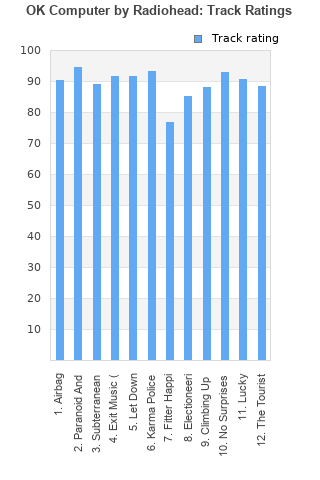 Rating metrics: Outliers can be removed when calculating a mean average to dampen the effects of ratings outside the normal distribution. This figure is provided as the trimmed mean. A high standard deviation can be legitimate, but can sometimes indicate 'gaming' is occurring. Consider a simplified example* of an item receiving ratings of 100, 50, & 0. The mean average rating would be 50. However, ratings of 55, 50 & 45 could also result in the same average. The second average might be more trusted because there is more consensus around a particular rating (a lower deviation).
(*In practice, some albums can have several thousand ratings)
This album is rated in the top 1% of all albums on BestEverAlbums.com. This album has a Bayesian average rating of 91.8/100, a mean average of 89.7/100, and a trimmed mean (excluding outliers) of 91.9/100. The standard deviation for this album is 17.0.

This album turns today 25 and I can just say - wow. Sounds contemporary, both due to its electronic incorporations in the lovely classic rock music and to the techno-economic dystopian future that was portrayed and that we are now, in part, living.

Great album with many great songs like airbag, Exit Music (For A Film) and Subterranean Homesick Alien.

Very futuristic production with this album feeling as if it is a genre of its own.

This is my second Radiohead album i’ve heard and i’m excited to hear the rest.

A hauntingly beautiful album, OK Computer has the ideas of a large rock opera, confined into the claustrophobic, gritty and personal sound Radiohead brings. Introducing more use of electronic instruments (both tying to the themes of technology and foreshadowing to their next masterpiece), Radiohead never sounded better up to this point. The abrasive, detailed production, paired with the creative instrumentation and Thom's harrowing and deep lyrics (bolstered by his powerful falsetto), there is little to hate about this album. It's complex and profound, and holds more relevance today than it did 25 years ago. The songs stand on their own and sound great; when strung together they make a surreal experience that will make you question so many things, all while you can't help but awe at the genius of this record. As flawless and important as a rock album, or album in general, can be.

This was it. The moment that made the guitar and all music that it made obsolete. This masterpiece was the moment where a band could say they had completed a genre.

Not so good to be the first ever

Radiohead, is a band that is a bit of a mystery to me. In all ratings and lists it in the top, but for me it is not a familiar band that I understand and worship. Why this record rated so high, a #1 one of all time beats me also. It is good but not amazing at the first listen. Perhaps the awesomeness waits for me somewhere after future listens. This being the second listen gives me an 85/100 rating at best.

I've always loved this album due to it's uniqueness when it was first released. Upon pulling it out recently and revisiting it a few times I've found it seems to of not held that same magic. Don't get me wrong, still a brilliant album full of top caliber songs. Just not standing the test of time with me unlike some earlier era bands (Beatles, Floyd etc)

Great album, absolutely great, but not my choice for #1. Mine would probably be a Beatles album, either Revolver or SGT Pepper’s. Definitely top 10 though.

Your feedback for OK Computer