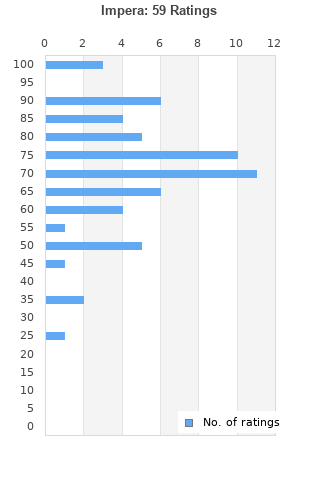 Impera is ranked 4th best out of 8 albums by Ghost (SE) on BestEverAlbums.com.

The best album by Ghost (SE) is Meliora which is ranked number 2038 in the list of all-time albums with a total rank score of 818. 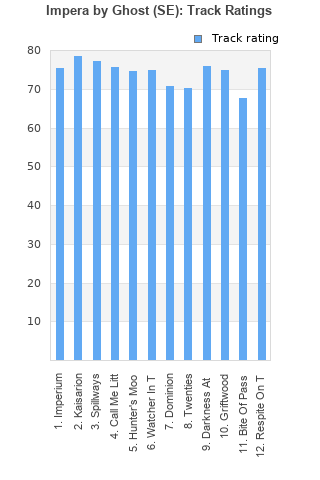 Rating metrics: Outliers can be removed when calculating a mean average to dampen the effects of ratings outside the normal distribution. This figure is provided as the trimmed mean. A high standard deviation can be legitimate, but can sometimes indicate 'gaming' is occurring. Consider a simplified example* of an item receiving ratings of 100, 50, & 0. The mean average rating would be 50. However, ratings of 55, 50 & 45 could also result in the same average. The second average might be more trusted because there is more consensus around a particular rating (a lower deviation).
(*In practice, some albums can have several thousand ratings)
This album has a Bayesian average rating of 71.4/100, a mean average of 71.2/100, and a trimmed mean (excluding outliers) of 71.2/100. The standard deviation for this album is 15.1.

Got real Avenged Sevenfold energy from this and in a good way !!

“Impera” sees the cracks in Ghost’s sound start to appear. Their move into poppier metal is beginning to feel a bit cheesy. Guitars are placed a bit over dramatically and increasingly predictively. The thematic criticism of religion comes off more stale than biting. There is an extremely schmaltzy key change on “Griftwood” that takes you right out of the song. Despite the dowdy over layer, “Impera” has a solid foundation. The tracks are arranged well and the inter-album flow is smooth. Still, “Impera” represents the stagnation before decline. Without strong innovation, this would be their drop-off point.

God bless (pun intended) Ghost for gracing us with yet another stupidly good album chock full of the Ghost DNA we’ve all gotten to know and love. Rock, anthemic grandeur, hair metal, seventies testosterone licks, pain, love, worship, blistering guitar riffs . . . its all here in all its glory

It's been a long time since I liked an album like I like this one.
Best tracks: spillways and Respite on the spitalfields

Your feedback for Impera