Cool It Down (studio album) by Yeah Yeah Yeahs 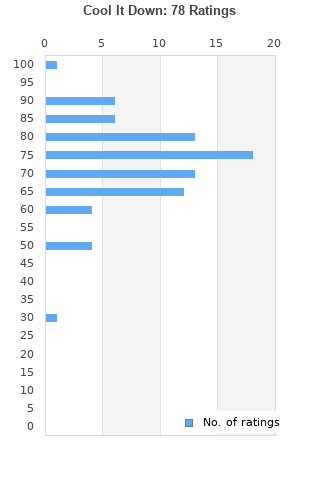 Cool It Down is ranked 4th best out of 7 albums by Yeah Yeah Yeahs on BestEverAlbums.com.

The best album by Yeah Yeah Yeahs is Fever To Tell which is ranked number 654 in the list of all-time albums with a total rank score of 2,831. 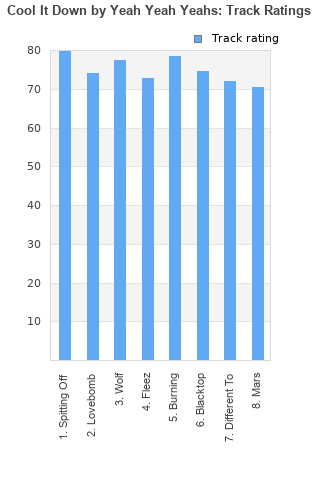 Cool It Down rankings

Cool It Down collection

Cool It Down ratings

Rating metrics: Outliers can be removed when calculating a mean average to dampen the effects of ratings outside the normal distribution. This figure is provided as the trimmed mean. A high standard deviation can be legitimate, but can sometimes indicate 'gaming' is occurring. Consider a simplified example* of an item receiving ratings of 100, 50, & 0. The mean average rating would be 50. However, ratings of 55, 50 & 45 could also result in the same average. The second average might be more trusted because there is more consensus around a particular rating (a lower deviation).
(*In practice, some albums can have several thousand ratings)
This album has a Bayesian average rating of 73.6/100, a mean average of 73.0/100, and a trimmed mean (excluding outliers) of 73.7/100. The standard deviation for this album is 11.2.

Cool It Down favourites

Cool It Down comments

Let’s be honest, YYY’s previous album ‘Mosquito’ was simply awful and as a long time fan it really came as quite the shock. Seemingly Karen O thinks the same as me with said album not available on any streaming service as part of their catalogue. I thought that was the end

‘Mosquito’ ? Look away nothing to see here

As a side note track 4 “Fleez” is a complete rip off of “! (The Song Formally Known As)” by Australian band Regurgitator. Listen for yourself I know I’m right

A welcome return, and one of the group's best. Enormous and world-weary, while still breaking out the swagger that made the band so thrilling in the first place when they want to.

A very exciting return from this veteran band that I agree with the previous comment sounds best when played at maximum volume !!!

Seriously kicks ass not gonna lie. Very exciting return. Singles were great but man couple of those deep cuts are even better. Highly recommend playing it loud to fully experience the awesomeness of the sick AF killer beats. Oof! I'm being ridiculous because I'm excited plus it's just really good and yes those beats surprised me at times like heck yeah!

Your feedback for Cool It Down