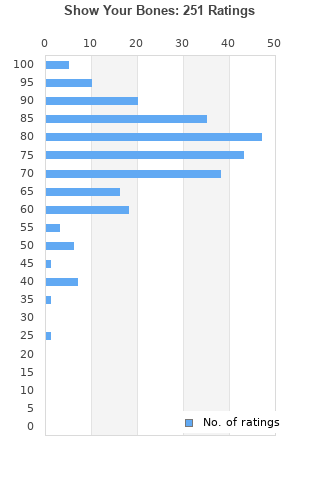 Show Your Bones is ranked 3rd best out of 7 albums by Yeah Yeah Yeahs on BestEverAlbums.com.

The best album by Yeah Yeah Yeahs is Fever To Tell which is ranked number 662 in the list of all-time albums with a total rank score of 2,825. 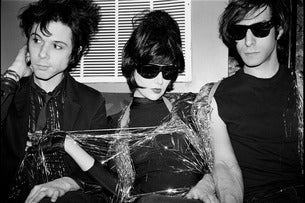 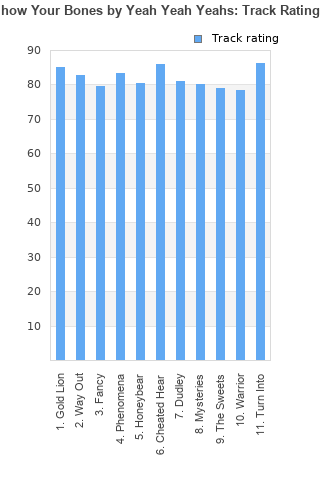 Rating metrics: Outliers can be removed when calculating a mean average to dampen the effects of ratings outside the normal distribution. This figure is provided as the trimmed mean. A high standard deviation can be legitimate, but can sometimes indicate 'gaming' is occurring. Consider a simplified example* of an item receiving ratings of 100, 50, & 0. The mean average rating would be 50. However, ratings of 55, 50 & 45 could also result in the same average. The second average might be more trusted because there is more consensus around a particular rating (a lower deviation).
(*In practice, some albums can have several thousand ratings)
This album is rated in the top 13% of all albums on BestEverAlbums.com. This album has a Bayesian average rating of 75.2/100, a mean average of 74.9/100, and a trimmed mean (excluding outliers) of 75.3/100. The standard deviation for this album is 12.8.

I like every song. I was expecting it to be their highest ranking. But I see they are rated about the same. Mid 70s.

This band seems to have great guitars, and singing.

Their best album imo. Turn Into and Cheated Hearts are brilliant

A really mistaken and underestimated album. My favorites are: Phenomena, Cheated Hearts, Dudley and Turn Into. Brilliant album!

One of my favourite indi rock albums from the 2000s. Not a weak track and I'm surprised it's not rated much higher considering I'd expect the YYY's to hit a demographic sweet spot on this site.

i heard "maps" and couple other of their songs from previous albums and wasn't that impressed. i had chances to pick up "fever to tell" for $4-ish used and passed. Average straight-ahead girl-rock, IMO. They must've added something this time around. I knew it immediately on hearing "Cheated Hearts". Intangible -- a little more melody replaces the undirected energy of former efforts. Some reviews say they've lost sass, but i still hear it. They're just tempering their brashness with a little heart. This album still has a couple songs that fall flat without their previous energy, but the peaks cover these holes enough for them to rise to my #37 spot -- a place i never expected YYYs to be.

Your feedback for Show Your Bones