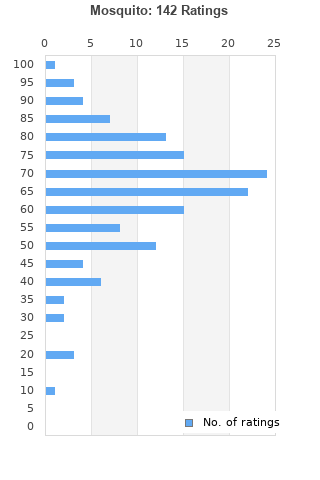 Mosquito is ranked 5th best out of 7 albums by Yeah Yeah Yeahs on BestEverAlbums.com.

The best album by Yeah Yeah Yeahs is Fever To Tell which is ranked number 656 in the list of all-time albums with a total rank score of 2,829. 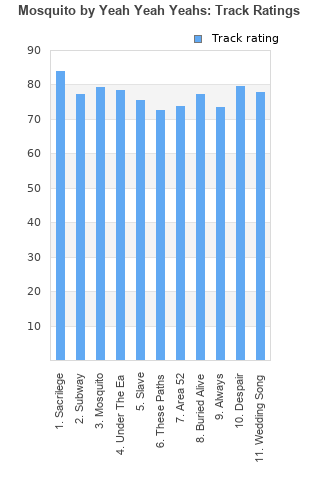 Rating metrics: Outliers can be removed when calculating a mean average to dampen the effects of ratings outside the normal distribution. This figure is provided as the trimmed mean. A high standard deviation can be legitimate, but can sometimes indicate 'gaming' is occurring. Consider a simplified example* of an item receiving ratings of 100, 50, & 0. The mean average rating would be 50. However, ratings of 55, 50 & 45 could also result in the same average. The second average might be more trusted because there is more consensus around a particular rating (a lower deviation).
(*In practice, some albums can have several thousand ratings)
This album has a Bayesian average rating of 66.0/100, a mean average of 65.1/100, and a trimmed mean (excluding outliers) of 65.5/100. The standard deviation for this album is 16.2.

Mosquito is a pretty decent follow-up to It's Blitz. Hard to beat that album as it's one of my all-time favorites by anybody. Slave is an excellent track as great as anything they've done. And now for the next album.... waiting... waiting...

A bit inconsistent in places, but a good record nonetheless. Fans of their early work will appreciate Mosquito and Area 52. Always, Despair, and Wedding Song are a trio of beautiful closers.
This album isn't their best, but it is underrated.
Plus the 90s gross-out/early cg art cover is delightfully strange.

Following on from the great Show You’re Bones & It’s Blitz, Mosquito is super disappointing to put it mildly. Nothing really works here and everything feels forced and stale. It breaks my heart to say this as I am a YYY fan . Such a shame this album is a genuine stain on the stellar YYY catalog

I feel quite a bit more enthusiastic about this album than most of the reviews and comments that I've seen both here and elsewhere, which tend to characterize it as unfocused and, perhaps even more deadly, uncool. I guess that's the price a band pays for being as unimpeachably hip as they were on previous releases such as Fever to Tell and Show Your Bones. I think, though, that the hipsters aren't giving full credit to what a great, amped-up song "Sacrilege" is; I rate it among their best. And the title track is vintage Yeah Yeah Yeahs--maybe a little more literal than usual, but also grating in that satisfying way that only Karen O and company know how to be.

An extremely disappointing album from Yeah yeah yeah's. The first album is their only truly great record, the second was good, it's blitz was a lot better, but this is easily the worst. What happened?

This album is just nowhere near as good as the 3 prior studio efforts from Yeah Yeah Yeahs. The hooks and the lyrics just are nowhere near as catchy or interesting as prior efforts. I think there are 3 worthy songs on the album, namely: Sacrilege, Subway, and Buried Alive (with a rapper named Doctor Octagon, who I am otherwise unfamiliar with). The rest of the songs could be passed over.

Okay at best, definitely not as good as they can do

Definitely not their best album, hell, it might be their worst, but it's still a blast. These Paths and Always are probably the two worst YYYs songs ever though in my opinion, however.

I call it graduating with honors, when a band makes it past the sophomore slump and follows with an esteemed junior and senior album. Yeah yeah yeahs flunked senior year.

Your feedback for Mosquito