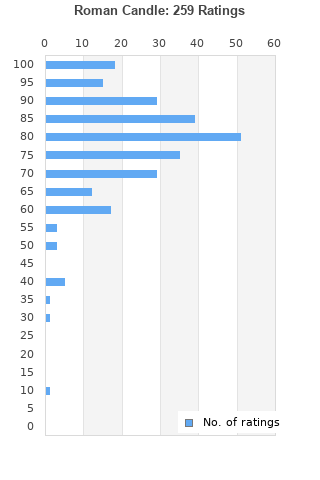 Roman Candle is ranked 6th best out of 10 albums by Elliott Smith on BestEverAlbums.com. 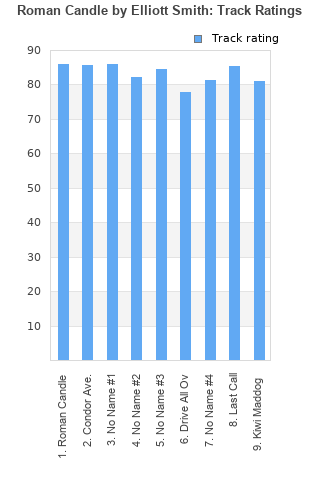 Rating metrics: Outliers can be removed when calculating a mean average to dampen the effects of ratings outside the normal distribution. This figure is provided as the trimmed mean. A high standard deviation can be legitimate, but can sometimes indicate 'gaming' is occurring. Consider a simplified example* of an item receiving ratings of 100, 50, & 0. The mean average rating would be 50. However, ratings of 55, 50 & 45 could also result in the same average. The second average might be more trusted because there is more consensus around a particular rating (a lower deviation).
(*In practice, some albums can have several thousand ratings)
This album is rated in the top 2% of all albums on BestEverAlbums.com. This album has a Bayesian average rating of 78.9/100, a mean average of 78.5/100, and a trimmed mean (excluding outliers) of 79.1/100. The standard deviation for this album is 13.8.

Every Elliott Smith album is just about perfect. I love the debut because the songs sound so intimate. This album always makes me feel good. "No Name #1" in particular is a really charming song.

A concise collection of tuneful and bittersweet lo-fi folk songs without much in terms of variety except a little harmonica on “No Name #3”, drums on “Kiwi Maddog 20/20”, and electric guitars on the last two tracks. The full Elliott Smith sound might not be fully developed yet but there's still no weak tracks, and highlights like “Condor Ave” and “No Name #1” are some of his best.
Favorites: “Condor Ave”, “Roman Candle”, all the “No Name” tracks, “Last Call”

A soft album from a great songwriter yet to gain his confidence as a solo artists. It's great, but not open enough to be the instant classics his next few works would be.

I could listen to only this album for days. It's my favorite of his. Just a gorgeous, crushing picture of a sad guy and his tenuous relationship with everything around him, but he very obviously desperately wants something to hold dear. Love the minute chord changes, really unbelievable stuff, and it just gets better with each listen.

An incredible debut album, my favorite from Elliott Smith. Ironically, his most of his unfinished tracks are his best, and this album shows Smith's talent early.

My second favourite Elliot Smith album after, either/or, Roman candle, is probably even darker than that record. It's a brilliant record that needs to be listened to in one sitting. All the tracks are excellent. Just another superb Elliot Smith album, just think how many more there could have been. A much missed songwriter.

This is my favorite Elliott Smith album, it just took a while. But it wasn't tell I had found it on vinyl did I realize what was going on. Could not stop listening to it for about a month and a half.

Intimate and beautifully suggestive. Elliott wears his heart on his sleeve and lets us all into his thought process. The depression in this album is overwhelming but its fragile structure makes for an amazing experience. The reason why I rate this album a little lower than Elliott Smith and Either/Or is the poor production quality, which makes the record hard to listen to at points.

Elliott Smith's work has always been deeply personal. Even at his most pop influenced, Elliott was never writing for anyone other than himself. In the case of Roman Candle, he never even intended for anyone other than himself to hear his art. This is unexpected the start of Smith's career of melancholy genius, showcasing him at his most personal, his most relatable, and his most vulnerable. Elliott Smith is playing directly to the listener with a starkness and a sense of utter sincerity. From when this album begins till when it ends, I feel like I might just have some idea of what it's like inside the troubled mind of this genius, and it makes me want to cry. Possibly the most intensely intimate album ever recorded.

He left us far, far too young

Your feedback for Roman Candle