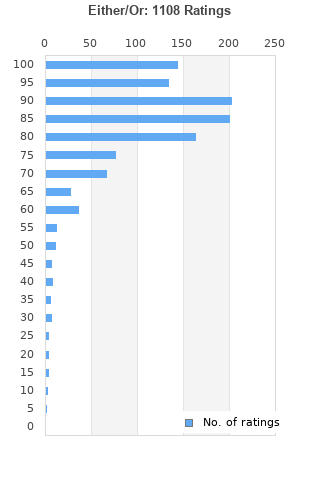 Either/Or is ranked as the best album by Elliott Smith. 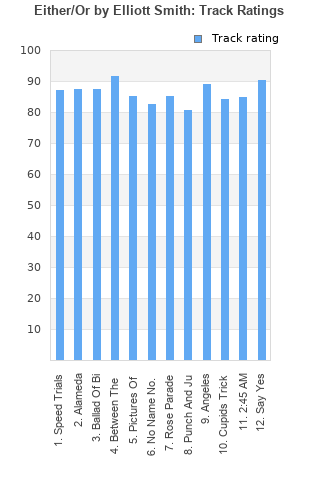 Rating metrics: Outliers can be removed when calculating a mean average to dampen the effects of ratings outside the normal distribution. This figure is provided as the trimmed mean. A high standard deviation can be legitimate, but can sometimes indicate 'gaming' is occurring. Consider a simplified example* of an item receiving ratings of 100, 50, & 0. The mean average rating would be 50. However, ratings of 55, 50 & 45 could also result in the same average. The second average might be more trusted because there is more consensus around a particular rating (a lower deviation).
(*In practice, some albums can have several thousand ratings)
This album is rated in the top 1% of all albums on BestEverAlbums.com. This album has a Bayesian average rating of 84.0/100, a mean average of 82.9/100, and a trimmed mean (excluding outliers) of 84.2/100. The standard deviation for this album is 14.8.

His voice is pitch perfect and fits so well with the musical style. A clear and rare spiritual descendant of Dylan.

Great singer song-writing does always good things for your mind and body.

I find this easier to listen to from start to finish than XO, though the latter might be more varied. Both great albums.

One of the quintessential singer-songwriters.

This is the kind of album that isn't supposed to get big, but it did. It's based on simplicity to convey its (so very sad) message both music-wise and lyrics-wise. What I like the most about it is his singing. On the one hand, it is Beatles-esque harmonious. On the other hand, I've been thinking how he heavily reminds me of another vocalist, but I can't quite put my finger on it, not sure who he is.

Very senseful album. One album with quiet tones but the favorite tracks for me are Between The Bars and Angeles.

Your feedback for Either/Or