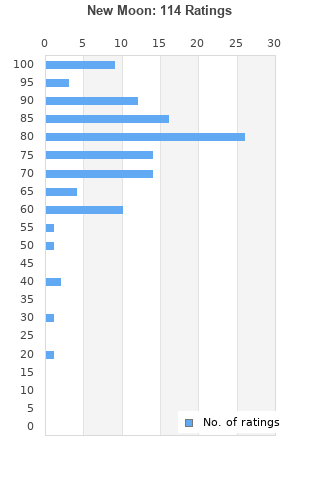 New Moon is ranked 7th best out of 10 albums by Elliott Smith on BestEverAlbums.com. 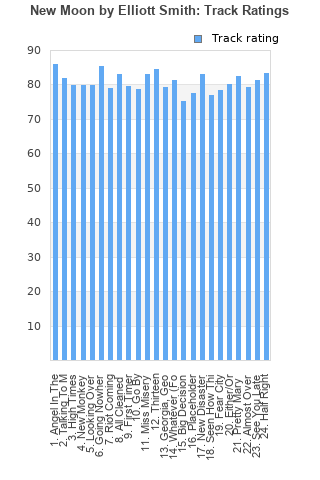 Rating metrics: Outliers can be removed when calculating a mean average to dampen the effects of ratings outside the normal distribution. This figure is provided as the trimmed mean. A high standard deviation can be legitimate, but can sometimes indicate 'gaming' is occurring. Consider a simplified example* of an item receiving ratings of 100, 50, & 0. The mean average rating would be 50. However, ratings of 55, 50 & 45 could also result in the same average. The second average might be more trusted because there is more consensus around a particular rating (a lower deviation).
(*In practice, some albums can have several thousand ratings)
This album is rated in the top 3% of all albums on BestEverAlbums.com. This album has a Bayesian average rating of 78.0/100, a mean average of 77.5/100, and a trimmed mean (excluding outliers) of 78.5/100. The standard deviation for this album is 13.7.

Beautiful collection of E.S outtakes and B-Sides showcasing an artist at the top of his game

Highlights include "New Monkey" , and early "Miss Misery" version , "Georgia,Georgia" , Big Star cover "Thirteen" and surprise inclusion an acoustic "See You Later" from his Heatmeiser days & of course album closer a stripped back "Half Right"

Whether or not this is a bunch of old outtakes or unfinished tracks doesn't really make a difference to my ears. Elliott’s masterful and seemingly effortless songwriting shines through often without much instrumental backing other than a clean acoustic guitar. It's not lo-fi like Roman Candle or the self-titled but not as polished as XO or Figure 8, creating a distinct atmosphere in Smith's discography.
Favorites: “Thirteen”, “Angel in the Snow”, “Going Nowhere”, “Miss Misery (Early Version)”, “Half Right”, “High Times”, “Looking Over My Shoulder”

It would make sense that he would cover Big Star...

Very good collection of songs! Plus I like the album cover. Seen How Things Are Hard and Angel In The Snow.

Your feedback for New Moon