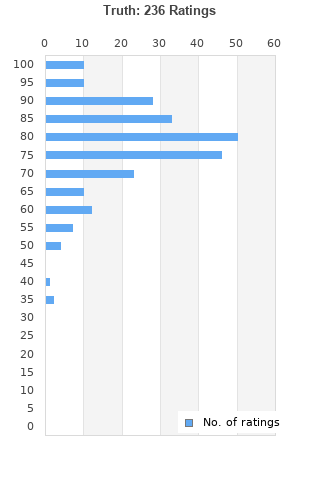 Jeff Beck-Truth Japan Import LP Gatefold w/2 Inserts..Near Mint...Excellent Copy
Condition: Used
Time left: 10h 43m 5s
Ships to: Worldwide
$44.98
Go to store
Product prices and availability are accurate as of the date indicated and are subject to change. Any price and availability information displayed on the linked website at the time of purchase will apply to the purchase of this product.  See full search results on eBay

Truth is ranked as the best album by Jeff Beck. 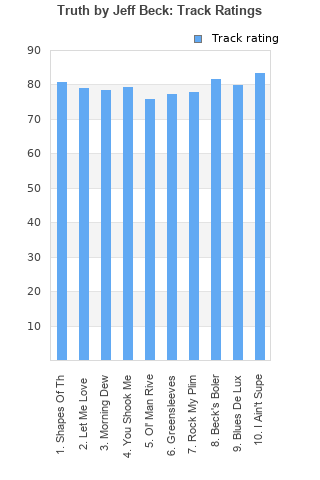 Rating metrics: Outliers can be removed when calculating a mean average to dampen the effects of ratings outside the normal distribution. This figure is provided as the trimmed mean. A high standard deviation can be legitimate, but can sometimes indicate 'gaming' is occurring. Consider a simplified example* of an item receiving ratings of 100, 50, & 0. The mean average rating would be 50. However, ratings of 55, 50 & 45 could also result in the same average. The second average might be more trusted because there is more consensus around a particular rating (a lower deviation).
(*In practice, some albums can have several thousand ratings)
This album is rated in the top 3% of all albums on BestEverAlbums.com. This album has a Bayesian average rating of 78.6/100, a mean average of 78.6/100, and a trimmed mean (excluding outliers) of 78.8/100. The standard deviation for this album is 11.4.

Great fusion of blues and rock. Beck's playing is masterful and Stewart's vocals are quite good. One of the best examples of blues rock I've heard. I wish Jeff would've done more albums like this one.

Two things I didn't expect on this album: Rod Stewart and a cover of Morning Dew. Both positives.

There are many bright spots on this album. However, some of Rod's Stewarts vocals sound a bit forced (Compare his version of "You Shook Me" to Robert Plant's).

Fine album of good quality. I love blues rock but somehow I don't really feel this record. I'm more a fan of Beck's jazz-fusion work like Blow by Blow and Wired.

This a great blues rock record that sounds amazingly like led zeppelin would a few years later. Rod Stewart's vocals are uncannily like Robert Plant at times and Beck's wonderful guitar playing is just as good as Jimmy Page. There are some odd choices of songs, like ol man river but they work very well. Beck's bolero is great rock workout. The only quibble is the fake applause on blues De luxe. Why did they put it on there? Anyway, if you're looking for a great bluesy rock album, you'd do a lot worse than to start with this. Classic.

If you love the first two Zeppelin albums and would like another fix, you NEED to give this a spin. Is it as good as Zeppelin? OF COURSE NOT! But, it's awesome, heavy blues rock with swagger, majesty & ambition. Essentially the blueprint for what Zeppelin would perfect just around the bend of time.

Your feedback for Truth