A Saucerful Of Secrets (studio album) by Pink Floyd 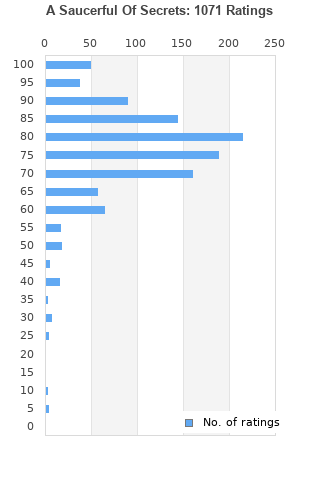 A Saucerful Of Secrets is ranked 9th best out of 36 albums by Pink Floyd on BestEverAlbums.com.

The best album by Pink Floyd is The Dark Side Of The Moon which is ranked number 2 in the list of all-time albums with a total rank score of 84,549. 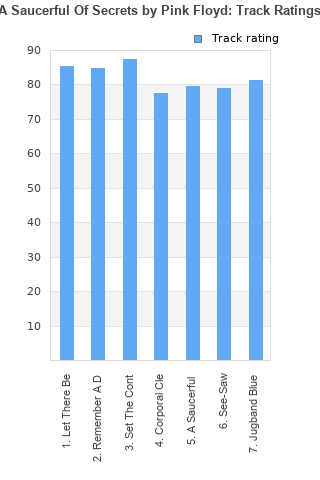 Set The Controls For The Heart Of The Sun
Rating: 87 (239 votes)Comments:

A Saucerful Of Secrets rankings

A Saucerful Of Secrets collection

A Saucerful Of Secrets ratings

Rating metrics: Outliers can be removed when calculating a mean average to dampen the effects of ratings outside the normal distribution. This figure is provided as the trimmed mean. A high standard deviation can be legitimate, but can sometimes indicate 'gaming' is occurring. Consider a simplified example* of an item receiving ratings of 100, 50, & 0. The mean average rating would be 50. However, ratings of 55, 50 & 45 could also result in the same average. The second average might be more trusted because there is more consensus around a particular rating (a lower deviation).
(*In practice, some albums can have several thousand ratings)
This album is rated in the top 5% of all albums on BestEverAlbums.com. This album has a Bayesian average rating of 76.9/100, a mean average of 76.1/100, and a trimmed mean (excluding outliers) of 77.0/100. The standard deviation for this album is 13.9.

A Saucerful Of Secrets favourites

A Saucerful Of Secrets comments

I do not see the appeal in this record. It feels very dull and there isn't much going on for the majority of the time the record is on. For example, on the title track it is 12 minutes long and nothing really happens. I can understand minimalist music but even that goes somewhere unlike on this track. The rest of the album is pretty similar except for the opening song which I think is great. I am also not a huge fan of Corporal Clegg and it makes me awkward whenever I hear it as it feels so out of place. This record also lacks the experimentation and the colourful instrumentation we receive on other Floyd projects making this feel very monotone and boring. There are obvious glimpses of the bands quality that shine through but it isn't enough to redeem the album for me. Overall, I have listened to this album several times and it always leave me feeling disappointed and in my opinion it is one of the weaker Pink Floyd albums.

Love this! Easily the darkest and most haunting Pink Floyd album that's actually listenable on the reg unlike the nightmarish far less reached for album that is Ummagumma. That too is dark/haunting but I rarely listen to it because it's almost too experimental lol. Saucerful and Obscured by Clouds are their most underrated.

This is the best Pink Floyd 60s output, some beautiful tracks on here and more accesible than predecessor.

Great record from their psychedelic period. "Jugband Blues" is haunting

This isn't Syd Barrett Floyd. Only one song is.

Syd Barrett Floyd is so overlooked. Different from what was to come but it's still such great music. Trippy but in no way disjointed. This album is fantastic from start to finish. Love it

As far as I'm concerned, this is one of the greatest albums ever created, and Floyd's best. It blows my mind that Humans made this album. Like, it's just so alien sounding lol. It's bewildering.

A great psychedelic album and worth owning for the first three tracks alone. Futuristic and experimental for it's time and it still sounds out as a true classic today. The only track I don't like is Corporal Clegg.

Your feedback for A Saucerful Of Secrets