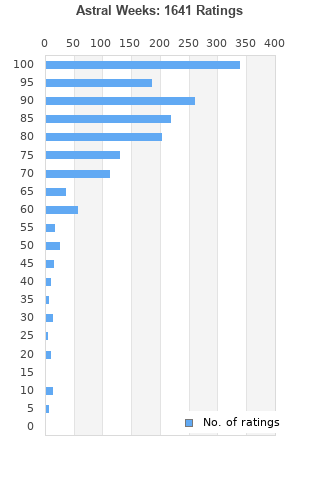 Astral Weeks is ranked as the best album by Van Morrison. 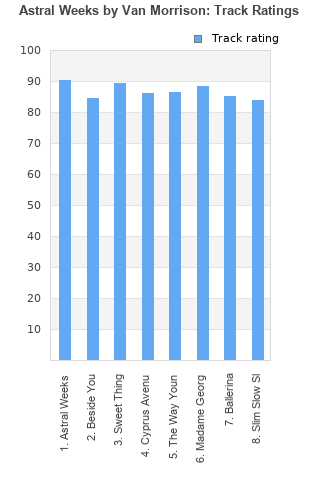 Rating metrics: Outliers can be removed when calculating a mean average to dampen the effects of ratings outside the normal distribution. This figure is provided as the trimmed mean. A high standard deviation can be legitimate, but can sometimes indicate 'gaming' is occurring. Consider a simplified example* of an item receiving ratings of 100, 50, & 0. The mean average rating would be 50. However, ratings of 55, 50 & 45 could also result in the same average. The second average might be more trusted because there is more consensus around a particular rating (a lower deviation).
(*In practice, some albums can have several thousand ratings)
This album is rated in the top 1% of all albums on BestEverAlbums.com. This album has a Bayesian average rating of 84.5/100, a mean average of 83.0/100, and a trimmed mean (excluding outliers) of 84.6/100. The standard deviation for this album is 17.0.

This is a superbly soporific album. Gentle throughout, but without straying into chillout territory - you wouldn't find this on any early-90s moods compilations. Personally, I feel the lack of diversity of the tracks' sounds works in the album's favour, tying together the vibe nicely. Van Morrison has had a long and illustrious career, but it's possible he's never produced anything as beautiful as this record.

Beautiful. Trance-like. Hypnotizing. Like a big pool of pretty sounds.

There are some great highlights on this one, but overall this sounds for me a little too samey and it's hard to stay focused throughout the album. Tracks are too long and after few songs I had enough.

I only heard this for first time in about 2016 but I had heard Van Morrison songs in passing before. I like his voice and style and found this album to be excellent, well produced and sounding so fresh. I also don't feel it was a dated 60's folk sound and stands the test of time well.

This is some quality Van Morrison action! Merges like 8 genres and his beautiful voice makes it work.

This folk jazz masterpiece with psychedelic leanings was apparently an album Van Mossison wasn't over happy about, he never wanted the strings added however their subtlety makes the album in my opinion. The album has the ability to bring about a soporific state in my case so if I need to relax it's a good choice. The simplicity of instrumentation helps create atmosphere. Aspects of his vocal style remind me of Nils Lofgren, particularly the opener.

So good. The way it was recorded and all. Love it. But shys away from my personal top 100. Kind of has a similar flow throughout the album that can get a bit.... boring at times. That being said, its definitely a masterpiece.

superb. brings the past, and the present into the future with waver

I 'm more into Moondance, but Madame George is simply otherworldly.

Your feedback for Astral Weeks