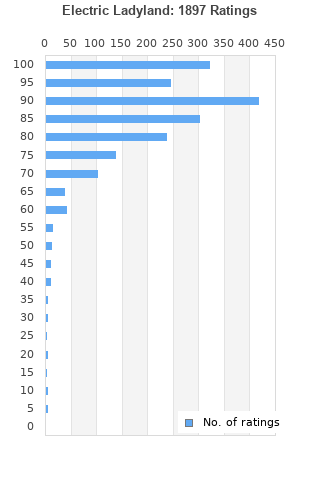 JIMI HENDRIX EXPERIENCE, The - Electric Ladyland (analog remastered) - 2xLP
Condition: New
Time left: 9h 36m 4s
Ships to: Worldwide
£24.73
Go to store
Product prices and availability are accurate as of the date indicated and are subject to change. Any price and availability information displayed on the linked website at the time of purchase will apply to the purchase of this product.  See full search results on eBay

Electric Ladyland is ranked 2nd best out of 20 albums by The Jimi Hendrix Experience on BestEverAlbums.com.

The best album by The Jimi Hendrix Experience is Are You Experienced which is ranked number 38 in the list of all-time albums with a total rank score of 30,459. 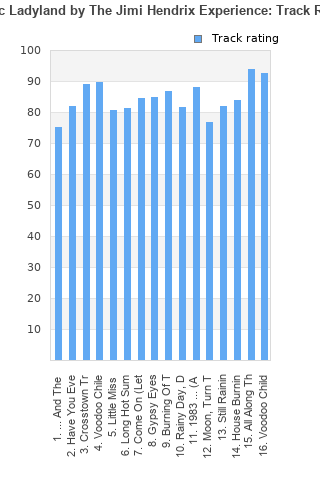 All Along The Watchtower
Rating: 94 (782 votes)Comments:

Rating metrics: Outliers can be removed when calculating a mean average to dampen the effects of ratings outside the normal distribution. This figure is provided as the trimmed mean. A high standard deviation can be legitimate, but can sometimes indicate 'gaming' is occurring. Consider a simplified example* of an item receiving ratings of 100, 50, & 0. The mean average rating would be 50. However, ratings of 55, 50 & 45 could also result in the same average. The second average might be more trusted because there is more consensus around a particular rating (a lower deviation).
(*In practice, some albums can have several thousand ratings)
This album is rated in the top 1% of all albums on BestEverAlbums.com. This album has a Bayesian average rating of 86.3/100, a mean average of 85.3/100, and a trimmed mean (excluding outliers) of 86.4/100. The standard deviation for this album is 13.3.

One of the all time great double LPs. Hendrix seamlessly transitions between different genres, from jazz to psychedelia, to blues jams and pop. It disappoints me that this album would end up being Hendrix's last studio album.

Jimi's most ambitious album may not be his most consistent, but I think his highest highs are reached here. As much as the Beatles are credited with revolutionizing studio experimentation, Hendrix showed himself to be just as creative in the studio. Many of the songs here at once come off as effortless, and as complex studio creations.

The first half of this album is good for Hendrix (great for everyone else) but it doesn't necessarily stand out. However, starting with the beautiful, psychedelic 'Burning of the Midnight Lamp,' Electric Ladyland crests and dives through some 0f Hendrix's finest work, each song fading into the next, finally culminating with perhaps his two crowning achievements in 'All Along the Watchtower' and 'Voodoo Child (Slight Return).'

1983 gets a special shoutout, as I am completely blown away each time I listen to it that it even exists. If any song best displays Hendrix's creativity, both as a composer and in the studio, his guitar wizardry, and his overall message (make love - not war), it is this one. One of the greatest psychedelic songs ever.

A really great Jimi record, my second favorite behind his debut.

My favorite track is Crosstown Traffic. Here you can hear classic Rock Music, the distortion the genuine guitar play and the perfect voice for such a good album.

i can get down wit this

Your feedback for Electric Ladyland