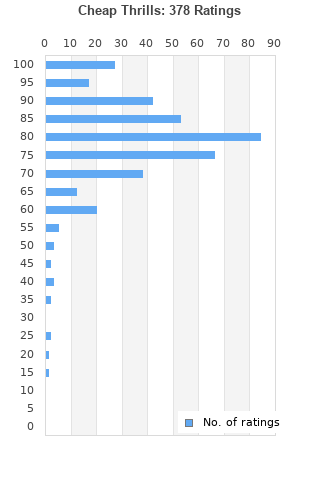 Cheap Thrills is ranked as the best album by Big Brother And The Holding Company. 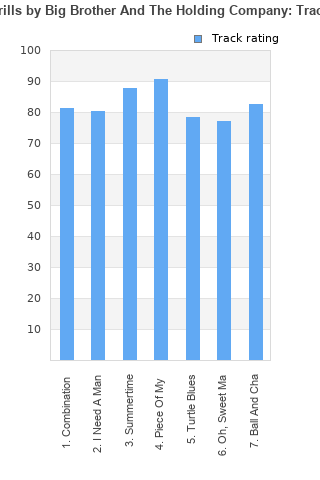 Rating metrics: Outliers can be removed when calculating a mean average to dampen the effects of ratings outside the normal distribution. This figure is provided as the trimmed mean. A high standard deviation can be legitimate, but can sometimes indicate 'gaming' is occurring. Consider a simplified example* of an item receiving ratings of 100, 50, & 0. The mean average rating would be 50. However, ratings of 55, 50 & 45 could also result in the same average. The second average might be more trusted because there is more consensus around a particular rating (a lower deviation).
(*In practice, some albums can have several thousand ratings)
This album is rated in the top 2% of all albums on BestEverAlbums.com. This album has a Bayesian average rating of 79.1/100, a mean average of 78.6/100, and a trimmed mean (excluding outliers) of 79.3/100. The standard deviation for this album is 13.1.

Not always sure "Pearl" is her best album; there's a lot of good stuff here. But apparently they were stressful sessions and management was determined to split her off from the band by the end.

Blisteringly hot blues rock. Rivals the likes of Blue Cheer and The Velvet Underground for the title of most raucous release of 1968.

the energy of Janis. decent stuff

Janis is untouchable and the song material is almost as consistently great, though the half-assed effort to make it seem like a live album feels like the cheapest thrill.

A powerful psychedelic album with plenty of edge and energy. Janis Joplin sounds like what Grace Slick might have sounded like if she gargled with Whisky regularly. Love 'Piece of my Heart'. Parts of Joplin's vocal style reminds me of a female version of Robert Plant.

Janis is Amazing and The Holding Company can jam with the best of them. Rating (82.86)

There's a whole lot to like about this album as it is filled with energy throughout the entire band, it showcases the remarkable vocal talent of Janis Joplin, and walks the somewhat unusual line of sounding like an album from a jam band that veers into classic rock and roll as well. Like a lot of albums from the late 60s, it suffers from the infusion of jarring sound effects added to the recording, in this case to simulate the feel of a live performance. Some of the songs are actually live and not surprisingly, they sound great as they do not need to be enhanced with over the top sound. The recording of the album sounds great and allows each of the musical parts to take center stage at different times. If for no other reason, check this album out for the classic one-two punch of "Piece of My Heart" and "Summertime" but tune in ahead of time for "I Need A Man To Love" and towards the end for the live version of "Catch Me Daddy."

Your feedback for Cheap Thrills