Music From Big Pink (studio album) by The Band 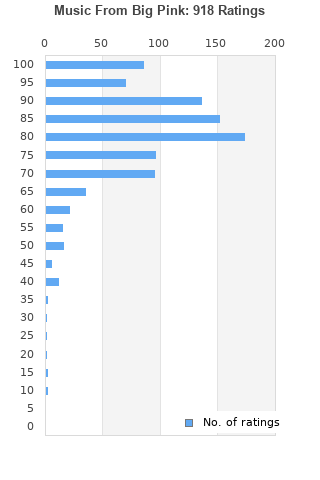 Music From Big Pink is ranked 2nd best out of 19 albums by The Band on BestEverAlbums.com.

The best album by The Band is The Band which is ranked number 236 in the list of all-time albums with a total rank score of 7,829. 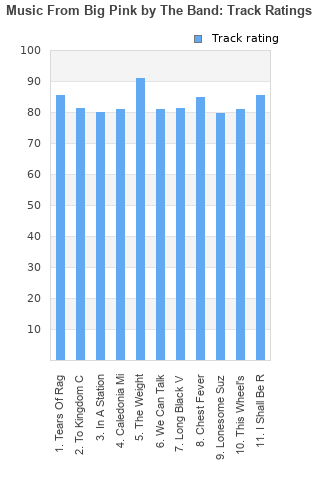 Rating metrics: Outliers can be removed when calculating a mean average to dampen the effects of ratings outside the normal distribution. This figure is provided as the trimmed mean. A high standard deviation can be legitimate, but can sometimes indicate 'gaming' is occurring. Consider a simplified example* of an item receiving ratings of 100, 50, & 0. The mean average rating would be 50. However, ratings of 55, 50 & 45 could also result in the same average. The second average might be more trusted because there is more consensus around a particular rating (a lower deviation).
(*In practice, some albums can have several thousand ratings)
This album is rated in the top 1% of all albums on BestEverAlbums.com. This album has a Bayesian average rating of 81.1/100, a mean average of 80.6/100, and a trimmed mean (excluding outliers) of 81.2/100. The standard deviation for this album is 13.6.

"Even stranger land" did Greil Marcus say in his essay about The Band. The opening notes carry me into a world of sonical and emotional wonders. It is disturbing music, played in new tempi, sung in unheard of harmonies nearly out of control but just because of that in total control. Carter Family, Béla Bartók, Swan Silvertones, Albert Ayler, Staple Singers and whatever more. I never heard such music before and never again.

The best album by The Band, a lot of highlights and enjoyable listen throughout the tracklist.

Really well composed and structured. Features a wonderful collection of songs and all of them are good!

Easily album of the year (excluding White Light/White Heat). Brilliant songwriting, performances (Richard Manuel is one of the most underrated singers ever), even atmosphere.

It dangles somewhere between the blue-eyed soul and lo-fi ridiculousness of The Beach Boys and Rolling Stones simplicity... but it was before The Rolling Stones started making such music, so that's interesting. The way they sometimes sing/scream through each other like they're singing by a campfire without an audience reminds me of Exile On Main St.

music that gives you hope for humanity

Your feedback for Music From Big Pink