The Beatles (The White Album) (studio album) by The Beatles

The Beatles (The White Album) by The Beatles
Year: 1968
Overall rank: 14th 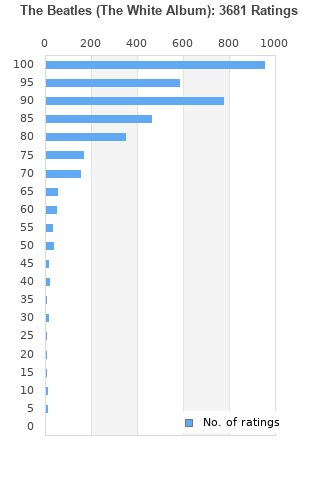 The Beatles (The White Album) is ranked 4th best out of 66 albums by The Beatles on BestEverAlbums.com.

The best album by The Beatles is Abbey Road which is ranked number 3 in the list of all-time albums with a total rank score of 75,807.

Listen to The Beatles (The White Album) on YouTube 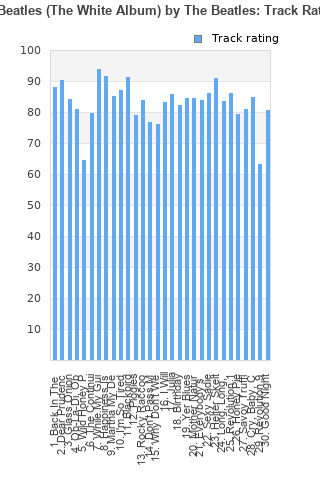 The Beatles (The White Album) rankings

The Beatles (The White Album) collection

The Beatles (The White Album) ratings

Rating metrics: Outliers can be removed when calculating a mean average to dampen the effects of ratings outside the normal distribution. This figure is provided as the trimmed mean. A high standard deviation can be legitimate, but can sometimes indicate 'gaming' is occurring. Consider a simplified example* of an item receiving ratings of 100, 50, & 0. The mean average rating would be 50. However, ratings of 55, 50 & 45 could also result in the same average. The second average might be more trusted because there is more consensus around a particular rating (a lower deviation).
(*In practice, some albums can have several thousand ratings)
This album is rated in the top 1% of all albums on BestEverAlbums.com. This album has a Bayesian average rating of 88.8/100, a mean average of 87.5/100, and a trimmed mean (excluding outliers) of 88.8/100. The standard deviation for this album is 14.0.

The Beatles (The White Album) favourites

The Beatles (The White Album) comments

What this album allows the listeners to see and experience is the creative process in all it's glory before cuts and decisions are made to condense into an album like what we have experienced from the band before. True there are some low-points but that is part of it's charm, it's unfiltered and ultimately is what makes it a different kind of masterpiece by having a chance to see every idea within a band of genius' heads.

Beware - there is a lot of filler on this album
some of the songs aren't even good enough
to be called filler. the good news is there are
a few good tunes. WMGGW, blackbird, mother
nature s son. and I will.

I love how varied this album is. It's probably the Beatles least coherent album but it's got so many classics that it doesn't really matter.

Back in the USSR, While my guitar gently weeps, Happiness is a warm gun, Blackbird and Helter Skelter are my personal favourites from this one, but the consistancy isnt quite there to make this comparable to AR, Sgt. Peppers or Revolver. The high points are extremly high, but the low points quite low as well. 90/100 for me

It's a little bit too long for my liking, there are definitely some songs that could have been cut (Revolution 9 for example). But Helter Skelter and Blackbird are just wonderful. I love Rocky Raccoon and Mother Nature's Son too. If it were a 10-song album with just the best 10, I reckon I'd rate this really high. It's a bit overrated for me.

Great Beatles album. I realy like Back in The USSR, Glass Onion, Happiness is a Warm Gun, Revolution 1 and While My Guitar Gently Weeps is greatest on this one. I am not huge on Helter Skelter and Blackbird but I like them. I will defend that Ob La Di Ob La Da and Don't Pass Me By aren't that bad. The only ones I can't stand is Wild Honey Pie and horrible Revolution 9.

The White Album does have some of the Beatles' finest moments of their illustrious career, such as While My Guitar Gently Weeps and Happiness is a Warm Gun. However the reason why I don't think it's their best album is that it is pretty inconsistent in quality and a couple of tracks are borderline unlistenable

Zofo was the first album that I was allowed to listen to by my super conservative christian parents, and this was the second. Music was a confusing beast for me when I was 14.

Your feedback for The Beatles (The White Album)