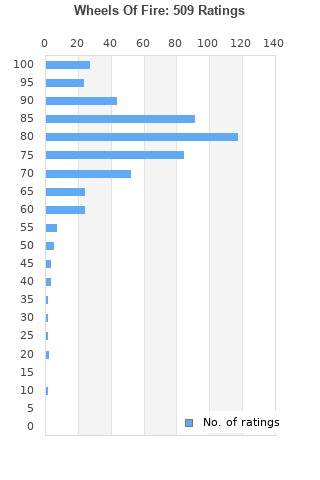 CREAM - Wheels Of Fire [vinyl] - 2 Vinyl - Import - **BRAND NEW/STILL SEALED**
Condition: New
Time left: 4h 42m 22s
Ships to: Worldwide
$189.95
Go to store
Product prices and availability are accurate as of the date indicated and are subject to change. Any price and availability information displayed on the linked website at the time of purchase will apply to the purchase of this product.  See full search results on eBay

Wheels Of Fire is ranked 2nd best out of 15 albums by Cream on BestEverAlbums.com.

The best album by Cream is Disraeli Gears which is ranked number 268 in the list of all-time albums with a total rank score of 7,362. 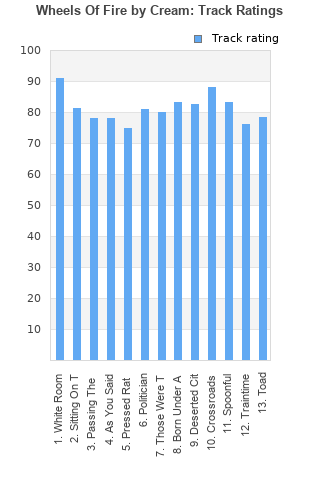 Rating metrics: Outliers can be removed when calculating a mean average to dampen the effects of ratings outside the normal distribution. This figure is provided as the trimmed mean. A high standard deviation can be legitimate, but can sometimes indicate 'gaming' is occurring. Consider a simplified example* of an item receiving ratings of 100, 50, & 0. The mean average rating would be 50. However, ratings of 55, 50 & 45 could also result in the same average. The second average might be more trusted because there is more consensus around a particular rating (a lower deviation).
(*In practice, some albums can have several thousand ratings)
This album is rated in the top 2% of all albums on BestEverAlbums.com. This album has a Bayesian average rating of 79.3/100, a mean average of 78.4/100, and a trimmed mean (excluding outliers) of 79.5/100. The standard deviation for this album is 12.6.

Spoonful , despite easily being my favourite track off of their debut, really doesn't do it for me as I don't enjoy aimless instrumental wandering... but still, you've got to respect the insane musicianship by the trio.
Same with Toad, though, whereas Traintime is much shorter and therefore more enjoyable and less rambling, and Crossroads is incredible with some of the best playing I've ever heard.

Second Best album after Disraeli Gears.
Obvious highlights - White Room, Crossroads, Born Under A Bad Sign, Politician, Those Were the Days
Enjoyable to me but not for everyone - Pressed Rat & Warthog, Deserted Cities of the Heart
Throwaways - Passing the Time, As You Said

It would be hard to not take a step backward after the awesome Disraeli Gears. If one steps back from expectations, this is still a very good album from talented, accomplished musicians.

Nothing more than a leftover album, only "White Room" here is really worth a listen and maybe the cover version of "Crossroads"

It's sad to see this go outside the top 1000. It seems like all of Cream's albums are

Great album, although it's not as good as Fresh Cream, or Disraeli Gears, it's still an all time great. This album is different from Disraeli Gears in that it has a better flow, but Disraeli Gears is better because it has more highlights, and more of their signature songs on it.

Your feedback for Wheels Of Fire