We're Only In It For The Money by The Mothers Of Invention
Year: 1968
Overall rank: 616th 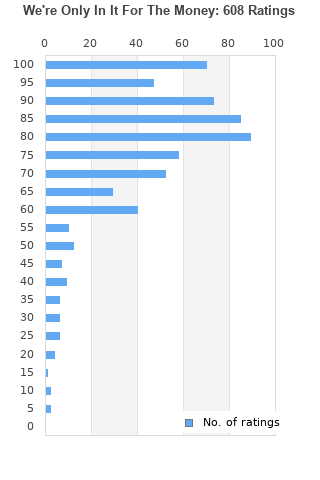 Zappa, Frank : Were Only in It for Money Lumpy Gravy CD
Condition: Very Good
$7.98

We're Only In It For The Money is ranked 2nd best out of 9 albums by The Mothers Of Invention on BestEverAlbums.com.

The best album by The Mothers Of Invention is Freak Out! which is ranked number 461 in the list of all-time albums with a total rank score of 4,081.

Listen to We're Only In It For The Money on YouTube

We're Only In It For The Money track list 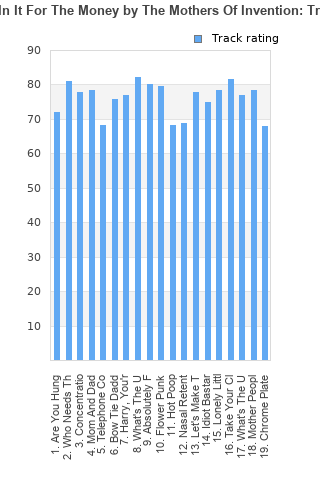 We're Only In It For The Money rankings

We're Only In It For The Money collection

We're Only In It For The Money ratings

Rating metrics: Outliers can be removed when calculating a mean average to dampen the effects of ratings outside the normal distribution. This figure is provided as the trimmed mean. A high standard deviation can be legitimate, but can sometimes indicate 'gaming' is occurring. Consider a simplified example* of an item receiving ratings of 100, 50, & 0. The mean average rating would be 50. However, ratings of 55, 50 & 45 could also result in the same average. The second average might be more trusted because there is more consensus around a particular rating (a lower deviation).
(*In practice, some albums can have several thousand ratings)
This album is rated in the top 2% of all albums on BestEverAlbums.com. This album has a Bayesian average rating of 78.7/100, a mean average of 78.0/100, and a trimmed mean (excluding outliers) of 78.8/100. The standard deviation for this album is 17.7.

We're Only In It For The Money favourites

We're Only In It For The Money comments

Terrible cover, pretty terrible music, taking the mick out of psychedelic music. Zappa had so many chips on his shoulder...

This isn't good in any terms in my opinion. Not great musicianship and not funny either.

A refinement of the concept of the concept album as Frank sees it. Comes together as much more than the sum of its parts. The Mothers mock and master a number of different styles and Frank shows off his studio wizardry to the furthest extent thus far. As goofy and out there as anything they'd previously released. Certainly not for everyone, I'd imagine.

Not a bad record to me. But, it didn't age well AT ALL. Not funny either, it's just bunch of hipsters criticizing hippie culture, without the self-awareness or originality. Zappa would be better in musicianship later years on, but sorry, Sgt. Pepper is a great album. They weren't in it for the "money".

it's correct twice. Track 11 Side 1. Hot Poop and when it "finishes"

An album with very high replay value. Fitting 19 tracks in 40 minutes is bound to come with some missteps, but there's a lot of memorable stuff.

The lyrical content doesn't hold much weight now, but the music still holds up fairly well. And it's always interesting to hear Frank Zappa's thoughts on current events. Oh how I wish he were around now!

one of Zappa's best

Your feedback for We're Only In It For The Money