Waiting For The Sun (studio album) by The Doors 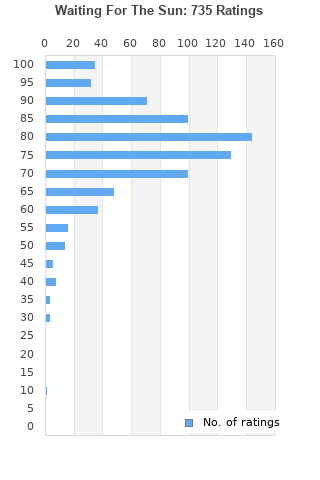 Waiting For The Sun is ranked 5th best out of 45 albums by The Doors on BestEverAlbums.com.

The best album by The Doors is The Doors which is ranked number 30 in the list of all-time albums with a total rank score of 32,681. 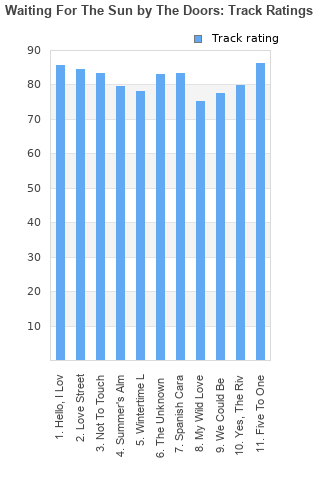 Waiting For The Sun rankings

Waiting For The Sun collection

Waiting For The Sun ratings

Rating metrics: Outliers can be removed when calculating a mean average to dampen the effects of ratings outside the normal distribution. This figure is provided as the trimmed mean. A high standard deviation can be legitimate, but can sometimes indicate 'gaming' is occurring. Consider a simplified example* of an item receiving ratings of 100, 50, & 0. The mean average rating would be 50. However, ratings of 55, 50 & 45 could also result in the same average. The second average might be more trusted because there is more consensus around a particular rating (a lower deviation).
(*In practice, some albums can have several thousand ratings)
This album is rated in the top 4% of all albums on BestEverAlbums.com. This album has a Bayesian average rating of 77.4/100, a mean average of 76.9/100, and a trimmed mean (excluding outliers) of 77.5/100. The standard deviation for this album is 12.7.

Waiting For The Sun favourites

Waiting For The Sun comments

Underrated position in The Doors catalogue, even if not the most consistent it is incredible and the high points make it a worthy listen, also one of my favorites by them - Five To One lands on this record.

Recording for this album began in 1967 before it eventually came out around the middle of 1968 and despite mixed critical appraisal would become the bands only number one album as well as giving them a second number one single with “Hello, I Love You”

‘Waiting For The Sun’ has always been a Doors catalogue favourite of mine with a bevy of iconic tracks form top to bottom with the afore mentioned “Hello, I Love You”, “Not to Touch the Earth" which was originally a 17 minute epic that would fill side two but eventually scrapped and closes with Morrisons iconic maxim, "I am the Lizard King/ I can do anything”. Then you have the superb “Summer’s Almost Gone” directly followed by the whimsical “Wintertime Love” (get it ?) which has always been one of my personal Doors deep cuts favourite. Then closing out Side one is the powerful and angry anti Vietnam war track “The Unknown Soldier” (do yourself a favour and jump on YouTube and look up The Doors Unknown Soldier 16mm film and get a load of their movie to support the track, its pretty intense for 1968 and includes Jim Morrison being tied up and shot and vomiting blood , and considering Jimbo’s alcohol consumption by this point who knows it might have been real blood). That’s a nearly perfect Side one with points deducted for the underwhelming “Love Street”

Side two opens with “Spanish Caravan” where Robbie shows off his excellent guitar chops in all their technical wonder. From here things dip with “My Wild Love” and “Yes the River Knows” bookending “We Could Be So Good Together”. If the album had finished here it would have been a major bummer, instead The Doors do it again for the third consecutive album by saving the best track to be the album closer following ‘The Doors’ (1967) & “The End” and ‘Strange Days’ (1967) & “When the Musics Over” by giving us the incredible “Five to One”

A very up and down album with some amazing highs and some pretty poor low points. When it is at its best it is a mix of fantastic vocals and great instrumentation. The music is beautiful yet experimental and the piano work is a real highlight for me. However, when it is bad it just sounds really awful with the vocals sounding like they are from a completely different singer and the music sounds off and unnatural. This is best displayed on My Wild Love. Overall, I would say there are more highs than lows and so it makes the whole record a pretty good album but not one of their best.

This album is often seen as one of the weaker releases from the Doors, it's not as derided as much as the below par Soft Parade of course but still it's never ranked in the same league as the first 2 or the last 2. Although I kind of agree with this, looking at the track listing now, it does look like a very strong collection of songs with the sole exception of My Wild Love. I suppose this proves the quality of work the Doors produced.

a couple amazing tracks, with some forgettable ones. Still a doors album!

When a band chooses to take its name from an Aldous Huxley book which describes a state of altered awareness, you might hope that their music is going to captivate and be original. This album certainly ticks those boxes. The sound encompasses many of the core ingredients of psychedelia. Unusually, the band never had a bass player, unless you watch their live archives, you may never realise this. Bass parts were played on keyboards and talking of keyboards, this is a band that forged their sound using the Vox Continental, a keyboard with a very unique sound which is particulary showcased on 'We Could Be So Good Together'. Great album!

My second favorite after Strange Days. It just sounds amazing ! The most underrated Doors album by far. The piano is so beautiful throughout the record.

Favorites: Hello I Love You, Not To Touch The Earth, Wintertime Love, The Unknown Soldier, Spanish Caravan, Five To One.

This is sad as in Depression,It's not cheerful as it reminds me of the movie,where did y'all go 'Jim,I do get cheerful enough to sing five to one,Hello, I love you,Love Street,Wild Love,.Yes it's worth of a vinyl Or Mp3./The Album entirely not filler very desperate for Jim's Legacy

Your feedback for Waiting For The Sun