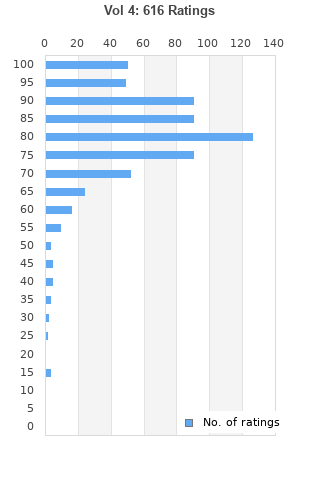 11 BLACK SABBATH 8 Tracks Discography with sleeves ALL TESTED Hell Paranoid Vol4
Condition: Very Good
Time left: 2h 21m 58s
Ships to: Worldwide
$104.05
Go to store
Product prices and availability are accurate as of the date indicated and are subject to change. Any price and availability information displayed on the linked website at the time of purchase will apply to the purchase of this product.  See full search results on eBay

Vol 4 is ranked 6th best out of 38 albums by Black Sabbath on BestEverAlbums.com.

The best album by Black Sabbath is Paranoid which is ranked number 66 in the list of all-time albums with a total rank score of 22,444. 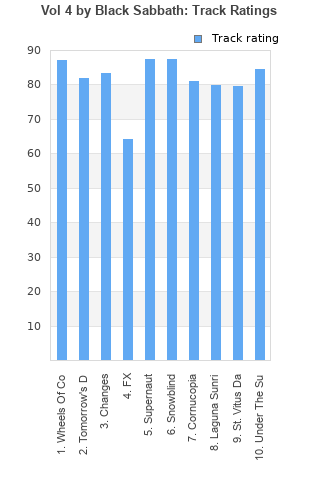 Rating metrics: Outliers can be removed when calculating a mean average to dampen the effects of ratings outside the normal distribution. This figure is provided as the trimmed mean. A high standard deviation can be legitimate, but can sometimes indicate 'gaming' is occurring. Consider a simplified example* of an item receiving ratings of 100, 50, & 0. The mean average rating would be 50. However, ratings of 55, 50 & 45 could also result in the same average. The second average might be more trusted because there is more consensus around a particular rating (a lower deviation).
(*In practice, some albums can have several thousand ratings)
This album is rated in the top 1% of all albums on BestEverAlbums.com. This album has a Bayesian average rating of 81.3/100, a mean average of 80.5/100, and a trimmed mean (excluding outliers) of 81.5/100. The standard deviation for this album is 13.3.

While not quite as popular as paranoid, it is just as good, and a bit more experimental. It even features a ballad!

Never been the hugest fan of this one. It has a bloated, brash feeling which is a world away from their previous works. Definitely a decent effort overall though.

Early Sabbath do no wrong. Even when massively coked up during the writing and making of this, they still produce an album of a caliber that most bands will never even get close to. An all round classic that never fails to deliver. 'Laguna Sunrise' will be played at my funeral when I'm dead. My all time favorite instrumental

I prefer several other albums in front of this one, however there are some excellent tracks to be found here like Snowblind and Wheels of Confusion. It appears that there is a fault in the recording to vinyl of Changes on the recently released vinyl re-issue. I took the first copy back because I thought it might just have been that lp but the replacement is the same. I also have the CD and that track is clear on the CD. It almost sounds like the recording levels were peaking as the track was cut. Disappointing as I had looked forward to getting this on vinyl.

Fantastic. Black Sabbath has a truly indelible sound that has always been one of my favorites, and this is another in their run of amazing albums. I find this works very well as an album, with the exception of Changes, which isn't a bad song, but really kills the momentum/mood (Laguna Sunrise has a similar issue but not as bad in my opinion).

The album starts and ends with extended songs that end in lengthy guitar solos. Wheels of Confusion is quite possibly my favorite on the album (although damn it's hard to choose), and Under the Sun is only a small step down. The centerpieces of the album are Supernaut and Snowblind, and of course they're awesome (Supernaut is an absolute banger). In positions 2 and 9 are songs with poppier bits, Tomorrow's Dream, an overall very catchy and very rocking song, and St Vitus Dance, which has a bit of a Byrds feel before descending into a crushing riff. FX is a nothing track really, can't even hear much happening in it. Cornucopia is also great.

While it's not perfect, I nonetheless feel that the seven rock songs on this album probably capture my favorite Sabbath sound. The riffs were flowing out of Iommi and I can instantly remember the riff for each of those seven tracks. If you only know Sabbath through Paranoid or Iron Man and you liked what you heard, I wholeheartedly recommend you listen to this album, along with all six original Sabbath albums. Classic moments on every one.

I give a lot of 10s for albums I love even if I consider them to be imperfect. This is a great example - track by track, this album isn't perfect, but damn if I don't love listening to it all the way through...

This album is significantly less deep than Master of Reality, yet more melodic and interesting. It still kicks ass, though, don't get me wrong.

I especially like "Chances" as one of the best ballads they had done.

Your feedback for Vol 4