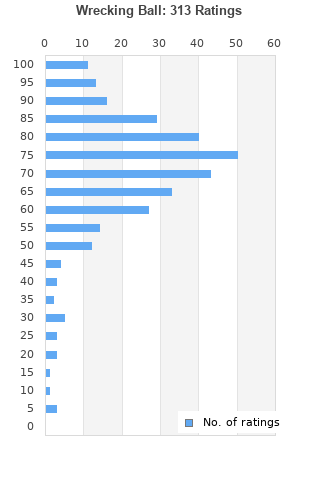 Wrecking Ball is ranked 10th best out of 98 albums by Bruce Springsteen on BestEverAlbums.com.

The best album by Bruce Springsteen is Born To Run which is ranked number 61 in the list of all-time albums with a total rank score of 23,586. 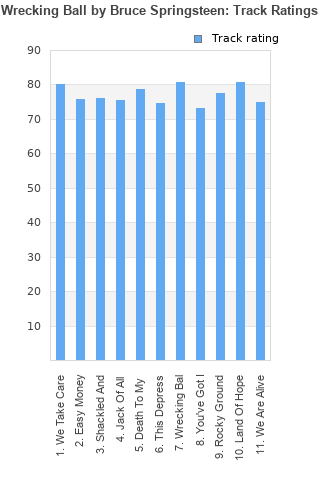 Outliers can be removed when calculating a mean average to dampen the effects of ratings outside the normal distribution. This figure is provided as the trimmed mean. A high standard deviation can be legitimate, but can sometimes indicate 'gaming' is occurring. Consider a simplified example* of an item receiving ratings of 100, 50, & 0. The mean average rating would be 50. However, ratings of 55, 50 & 45 could also result in the same average. The second average might be more trusted because there is more consensus around a particular rating (a lower deviation).
(*In practice, some albums can have several thousand ratings)
This album has a mean average rating of 71.0/100. The trimmed mean (excluding outliers) is 71.9/100. The standard deviation for this album is 17.9.

Showing latest 10 comments | Show all 23 comments | Most Helpful First | Newest First
(Only showing comments with -2 votes or higher. You can alter this threshold from your profile page. Manage Profile)

Criminally underrated Bruce record
This is one of his best albums

This will go down as one of Bruce's Classic albums

Wrecking ball is Bruce springsteen's angry response to the aftermath of hurricane Katrina and the recession that had hit the U.S. and the rest of the world. Springsteen really has a bee in his bonnet, especially on the sarcastic opening track, we take care of our own, reminiscent of, born in the USA, in so much that it could easily be misunderstood as a flag waving anthem. Elsewhere, Bruce rages at the fat cat bankers on, Jack of all trades, and, does his pogues/clancy brothers bit on, death to my hometown, Irish accent and all. The title track is an excellent tribute to Yankee stadium, about to be knocked down and rebuilt, but Springsteen reminds us they can tear down the walls but can't take away the memories. Easy money, follows a couple forced into a criminal existence, and, land of hope and dreams, finally gets a studio incarnation, featuring saxophone from the big man, the late Clarence Clemons. We are alive, is a brilliant Johnny Cash type track, about the souls of the dead, still alive and kicking. If there are any weak tracks it's the brooding, my depression, and the throwaway, you've got it. Wrecking ball, is a brilliant album, which I believe will eventually go down as a Springsteen classic. Superb.

Brilliant album from The Boss one of his best ever & definitely the best album of 2012.

Another classic. His best since The Rising. One of the very best of the decade and, along with The Rising, his best later day album.

My favorite album of 2012. Very action-packed. Well, that's the feeling I get.

The Boss has a prime directive--to give voice to the downtrodden working man--and Wrecking Ball carries on that tradition. What I find interesting is that the despair in the lyrics would have worked well as a sparse collection similar to Nebraska. But he opted to go the other direction and pile all the usual rock sounds in there, along with some gospel choir, and a fair smattering of horns.

Great album and what a live tour last year and springsteen is coming to Finland again in May.

Your feedback for Wrecking Ball