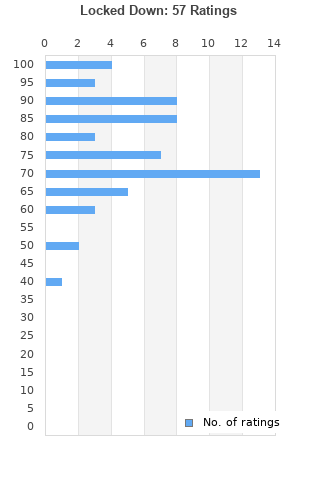 Locked Down is ranked as the best album by Dr. John. 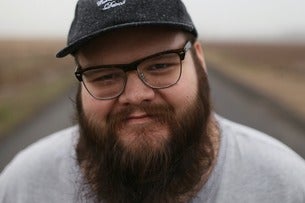 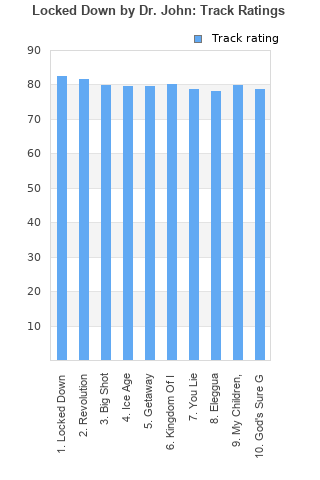 Rating metrics: Outliers can be removed when calculating a mean average to dampen the effects of ratings outside the normal distribution. This figure is provided as the trimmed mean. A high standard deviation can be legitimate, but can sometimes indicate 'gaming' is occurring. Consider a simplified example* of an item receiving ratings of 100, 50, & 0. The mean average rating would be 50. However, ratings of 55, 50 & 45 could also result in the same average. The second average might be more trusted because there is more consensus around a particular rating (a lower deviation).
(*In practice, some albums can have several thousand ratings)
This album is rated in the top 5% of all albums on BestEverAlbums.com. This album has a Bayesian average rating of 77.0/100, a mean average of 77.7/100, and a trimmed mean (excluding outliers) of 77.7/100. The standard deviation for this album is 13.0.

Excellent Dr. John album. Up there with his very best. Brilliant record.

I don't know why, but I find this my favourite by him. I just can't put my finger on why..

No matter how great a musician or band may be, everyone, with very few exceptions, makes an ok album. Dr. John is absolutely a music legend in the blues scene. His music is great, his album “Gris-Gris" is one of the best you’ll ever hear. However this album is not. See, the issue with this album is that we’ve heard it all before. It’s the same old stuff from Dr. John, nothing really exciting or new. There was one exception though. The song “Getaway" is awesome. I mean it’s gritty, it’s reverbed all over the place with beautiful, yet raw guitar playing and Dr. John’s gritty voice singing over it. That is a great song. If the rest of the album had been like that, this would’ve been an incredible album. However it wasn’t, it was an alright album. This isn’t to say that the music was bad, it wasn’t, it’s just, nothing aside from “Getaway" stood out for me.

Your feedback for Locked Down