Never Let Me Down (studio album) by David Bowie 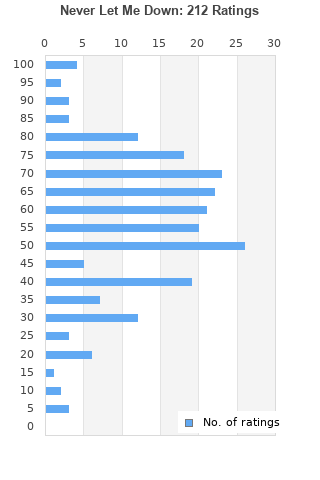 David Bowie ex / m- promo PS Never Let Me Down 7" remix edit / same
Condition: Used
Time left: 3h 40m 22s
Ships to: Worldwide
$9.75
Go to store
Product prices and availability are accurate as of the date indicated and are subject to change. Any price and availability information displayed on the linked website at the time of purchase will apply to the purchase of this product.  See full search results on eBay

Never Let Me Down is ranked 27th best out of 81 albums by David Bowie on BestEverAlbums.com.

The best album by David Bowie is The Rise And Fall Of Ziggy Stardust And The Spiders From Mars which is ranked number 9 in the list of all-time albums with a total rank score of 62,987. 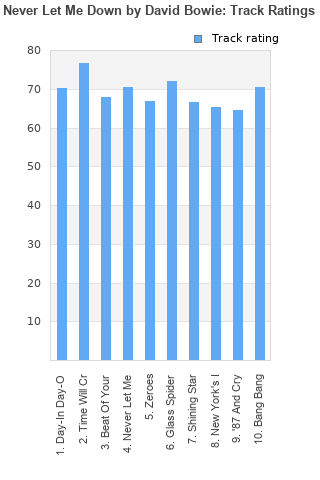 Never Let Me Down rankings

Never Let Me Down collection

Never Let Me Down ratings

Rating metrics: Outliers can be removed when calculating a mean average to dampen the effects of ratings outside the normal distribution. This figure is provided as the trimmed mean. A high standard deviation can be legitimate, but can sometimes indicate 'gaming' is occurring. Consider a simplified example* of an item receiving ratings of 100, 50, & 0. The mean average rating would be 50. However, ratings of 55, 50 & 45 could also result in the same average. The second average might be more trusted because there is more consensus around a particular rating (a lower deviation).
(*In practice, some albums can have several thousand ratings)
This album has a Bayesian average rating of 57.6/100, a mean average of 56.8/100, and a trimmed mean (excluding outliers) of 56.8/100. The standard deviation for this album is 19.3.

Never Let Me Down favourites

Never Let Me Down comments

Certainly the weakest Bowie record yet for me. Too poppy, too many electric drums, just not interesting enough for a revisit other than "Time Will Crawl" which I liked quite a bit.

this is useally said a bad bowie album.i saw him on the glass spider tour[Wembley] I didn't like it.too much theatre and the music was not great.my only bowie show.but I be honest this album over the years has grown on me. thereis a newer updated version included on the loving the alien box set which is worth a listen. this is worth another listen too.

Not what Bowie is used to do, but it's a good 80s album. And Time Will Crawl is a masterpiece.

The first 4 songs aren't terrible, but the next 6 sure are

This album deserves another look and was one of Bowie’s most successful. This continues in the same vein of Let’s Dance and Tonight. The production needs some getting used to but it was the 80s. If you can look past that there are some great tunes such as Time Will Crawl, Never Let Me Down and Shining Star.

Not quite as bad as you might expect, but certainly not very good either. Not as good as, tonight, and it's clear at this period in his career he's creatively burnt out. All in all, never let me down, is probably around about average and just above bearable.

Released during a low period in Mr. Bowies life. This record is not his worst but it comes pretty close.

This... is Bowie's worst? I dunno, I enjoyed it the whole way through.

It's pretty bad. Sounds plastic. Much below Bowie's usual standards.

Your feedback for Never Let Me Down