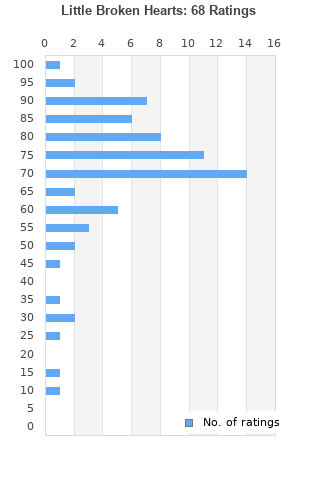 Norah Jones - Little Broken Hearts - IMPORT "Blue Note" Digipak + Poster / Jazz
Condition: Good
Time left: 1d 3h 29m 31s
Ships to: Worldwide
$10.39
Go to store
Product prices and availability are accurate as of the date indicated and are subject to change. Any price and availability information displayed on the linked website at the time of purchase will apply to the purchase of this product.  See full search results on eBay

Little Broken Hearts is ranked 2nd best out of 9 albums by Norah Jones on BestEverAlbums.com.

The best album by Norah Jones is Come Away With Me which is ranked number 1118 in the list of all-time albums with a total rank score of 1,658.

Tickets from Ticketmaster Get tickets
May
18
Tue
20:00 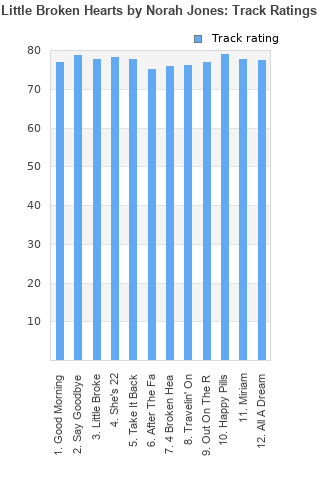 Rating metrics: Outliers can be removed when calculating a mean average to dampen the effects of ratings outside the normal distribution. This figure is provided as the trimmed mean. A high standard deviation can be legitimate, but can sometimes indicate 'gaming' is occurring. Consider a simplified example* of an item receiving ratings of 100, 50, & 0. The mean average rating would be 50. However, ratings of 55, 50 & 45 could also result in the same average. The second average might be more trusted because there is more consensus around a particular rating (a lower deviation).
(*In practice, some albums can have several thousand ratings)
This album has a Bayesian average rating of 71.2/100, a mean average of 69.9/100, and a trimmed mean (excluding outliers) of 70.8/100. The standard deviation for this album is 18.5.

This is, I would say, the best album Norah Jones has done to this date. I would also say that that is, in part, due to it’s production by none other than the great Danger Mouse (Brian Burton). After working with Danger Mouse and Daniele Luppi on a couple of tracks of “Rome" (another great album you should get), Jones and Danger Mouse have teamed up and it works so well. You can always tell when Danger Mouse produces an album, it has a certain sound to it, and that sound works for a lot of artists, but it especially works for Norah Jones. Jones has a great voice, but not in the typical pop sense, rather she has a very sexy, dark voice, the kind that keeps you intrigued. Each of the songs on this album sound unique, this isn’t an album you’re going to get bored with at all. It’s pop, but it doesn’t sound contrived at all. It’s an incredibly well done album and I hope to hear more like this from Norah Jones.

Wow, I was surprised how amazing this album is. I thought she was going downhill but she totally proved me wrong. One of the best if not the best album of the year.

I think this is the best album I have heard in a long time. This is the only Norah Jones work I have heard, from other comments I see I may not her older music as well as it is different. The "dark side" theme on this really works for me.

Another pretty bland "change up" from the wonderfully talented Norah Jones.

Your feedback for Little Broken Hearts