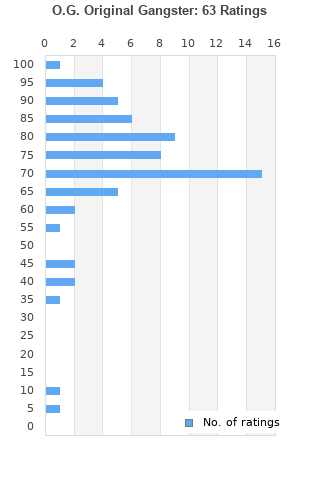 O.G. Original Gangster is ranked as the best album by Ice-T. 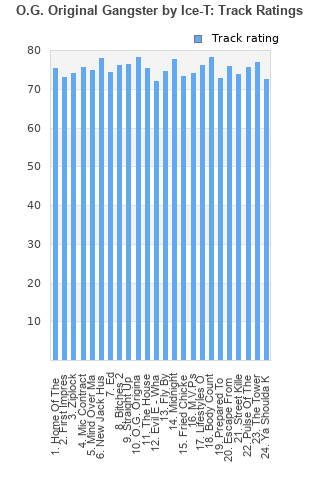 Rating metrics: Outliers can be removed when calculating a mean average to dampen the effects of ratings outside the normal distribution. This figure is provided as the trimmed mean. A high standard deviation can be legitimate, but can sometimes indicate 'gaming' is occurring. Consider a simplified example* of an item receiving ratings of 100, 50, & 0. The mean average rating would be 50. However, ratings of 55, 50 & 45 could also result in the same average. The second average might be more trusted because there is more consensus around a particular rating (a lower deviation).
(*In practice, some albums can have several thousand ratings)
This album is rated in the top 24% of all albums on BestEverAlbums.com. This album has a Bayesian average rating of 74.2/100, a mean average of 72.2/100, and a trimmed mean (excluding outliers) of 74.4/100. The standard deviation for this album is 18.2.

Listen properly to what is being said and you may come to the conclusion that this is one of most intelligent rappers you've heard. Yes he enjoys to subvert and play but he does try and put stories over with a moral.

Some brilliant moments, but they are too few and too far between with utter junk threw in between. I also have a bit of a problem with the "gangbangers, rapists, drugdealers and other upstanding citizens of society still being in prison is bullshit" attitude. But that's probably just me being racist.

Your feedback for O.G. Original Gangster