The Information (studio album) by Beck 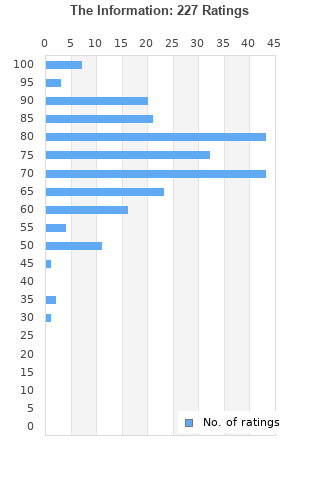 The Information is ranked 9th best out of 19 albums by Beck on BestEverAlbums.com.

The best album by Beck is Odelay which is ranked number 256 in the list of all-time albums with a total rank score of 7,260. 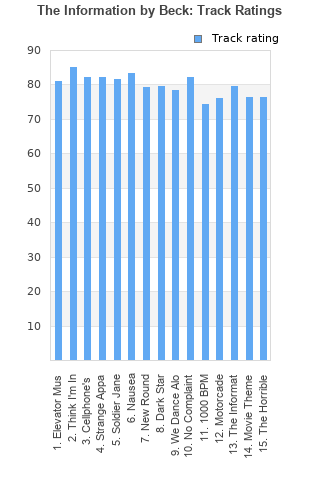 Rating metrics: Outliers can be removed when calculating a mean average to dampen the effects of ratings outside the normal distribution. This figure is provided as the trimmed mean. A high standard deviation can be legitimate, but can sometimes indicate 'gaming' is occurring. Consider a simplified example* of an item receiving ratings of 100, 50, & 0. The mean average rating would be 50. However, ratings of 55, 50 & 45 could also result in the same average. The second average might be more trusted because there is more consensus around a particular rating (a lower deviation).
(*In practice, some albums can have several thousand ratings)
This album is rated in the top 17% of all albums on BestEverAlbums.com. This album has a Bayesian average rating of 74.5/100, a mean average of 73.9/100, and a trimmed mean (excluding outliers) of 74.6/100. The standard deviation for this album is 12.6.

Interesting that this album includes a track called "Elevator Music" because I thought of the entire album as background music - not bad elevator music, but nothing that really captured me and made me want to hear it again either. Am I the only person whose album contained an unannotated bonus disc?

This album is classic Beck and a great listen. Even if nothing makes me crap myself on this album, I'd listen to this 500x on repeat before I'd listen to most artists feeble attempts to be this good.

"Elevator Music" and "Think I'm In Love" are some of the best songs in Beck's catalog. Unfortunately, the album tapers off bit by bit after that.

Sure, it doesn't compare to his mid 90s work, and one could argue that he tries nothing new since this record is built off alt rock, hip-hop and scattered electronica, *but* "The Information" manages to hold your attention whilst providing great tunes for over an hour. Now if that isn't impressive, then I don't know what is.

Good album by Beck, it starts off really strong but kinda dips in quality towards the last 5 tracks (the No Complaints through Motorcade run is particularly a step down in quality compared to the tracks before them). Still, it's a solid record and it has one of my favorite songs by Beck (Soldier Jane).

Beck doesn't reinvent the wheel here but it's still a lovely, enjoyable effort.

I like how all the comments are like
Beck didn't changed, he's still the Beck we know when we listened to Beck

Beck doesn't do anything really new on this album, and it's a bit of a letdown. Still Beck, still solid, but not as vital as his other work.

Your feedback for The Information