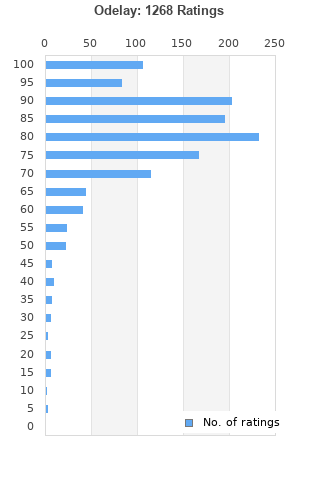 Beck - Odelay CD
Condition: Very Good
Time left: 2h 29m 29s
Ships to: Worldwide
$3.87
Go to store
Product prices and availability are accurate as of the date indicated and are subject to change. Any price and availability information displayed on the linked website at the time of purchase will apply to the purchase of this product.  See full search results on eBay

Odelay is ranked as the best album by Beck. 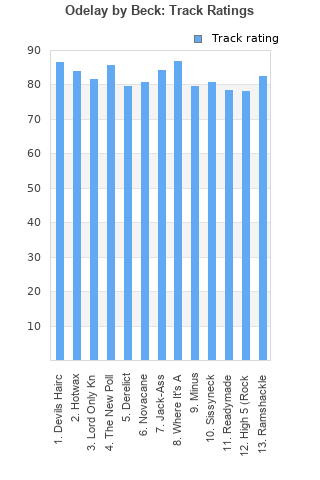 Rating metrics: Outliers can be removed when calculating a mean average to dampen the effects of ratings outside the normal distribution. This figure is provided as the trimmed mean. A high standard deviation can be legitimate, but can sometimes indicate 'gaming' is occurring. Consider a simplified example* of an item receiving ratings of 100, 50, & 0. The mean average rating would be 50. However, ratings of 55, 50 & 45 could also result in the same average. The second average might be more trusted because there is more consensus around a particular rating (a lower deviation).
(*In practice, some albums can have several thousand ratings)
This album is rated in the top 1% of all albums on BestEverAlbums.com. This album has a Bayesian average rating of 81.0/100, a mean average of 79.8/100, and a trimmed mean (excluding outliers) of 81.0/100. The standard deviation for this album is 14.8.

What genre is this? The answer: Beck. It's a collage of everything Beck ever experienced and made his own thing. It's like an art student did a scrapbook of things he like and end up made a fresh work. Beck had no one particular style and THAT is Beck's style.

Beck can be brilliant in passages, but I just don't like very many of these songs.

I don't find it that enjoyable, but this is an artistic statement, effortlessly blending so many different genres of music that is admirable at the very least.

Where It's At
Devils Haircut
The New Pollution
Jack-Ass
Hotwax

Listening this back, I really enjoy the Dust Brothers' intermezzos, after which I have to sit through verses and choruses of Beck's mediocre, occasionally okay songwriting. It makes me wonder why they settled as producers and didn't just go solo as their Chemical nephews. "But Beck also produced this", yeah, I've heard Mellow Gold, and that ain't this.

A smorgasboard of sounds and lyrics.

Whilst for me, the individual tracks may range in mixed ratings from good, great, excellent and brilliant (no duds!), it is definitely a case I feel that the whole is greater than the sum of its parts. Take the time, relax and play the entire album as it's an interesting, diverse, talented, fun, but yet still a cohesive play. Enjoy!

Listening to this album for the first time in 2019 is tough- I know that there's a huge Beck fanbase out there and I've been trying to find out why on my own. I really didn't like Mellow Gold at all and I feel like, though this album is a massive improvement, there's still a lot Beck leaves on the table. Maybe it's the lo-fi sound that I don't fully gravitate towards (my favorites on the album are the more well-produced songs with a lot going on), or maybe I just haven't understood the apathetic nature of his mid-90s lyricism and vocalization. I think maybe this album is very much a product of its time- I compare it to a mixture of Cake and Fastball.
But there's definitely improvement from 1994 for Beck. I still look forward to delving further into my investigation, especially now that his successive albums tend to favor different genres and better production (from the songs I've heard so far), but I remain trepidatious.
Favorite Tracks: The New Pollution, Where It's At, Minus

Favorites: Hotwax; Novacane; Where It's At.

Your feedback for Odelay