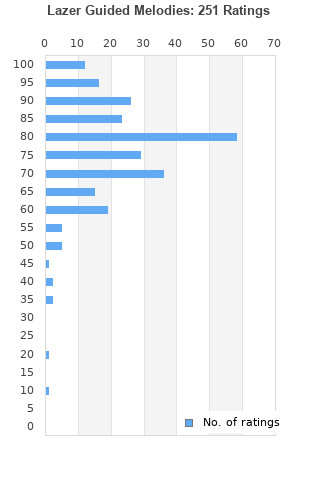 Lazer Guided Melodies is ranked 2nd best out of 13 albums by Spiritualized on BestEverAlbums.com.

The best album by Spiritualized is Ladies And Gentlemen We Are Floating In Space which is ranked number 243 in the list of all-time albums with a total rank score of 7,483. 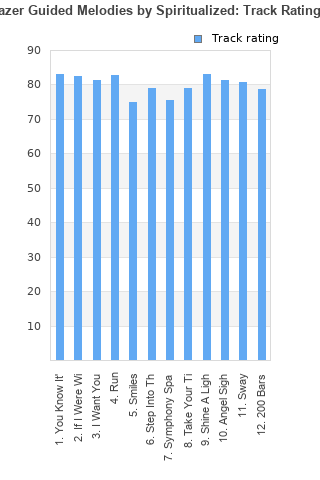 Rating metrics: Outliers can be removed when calculating a mean average to dampen the effects of ratings outside the normal distribution. This figure is provided as the trimmed mean. A high standard deviation can be legitimate, but can sometimes indicate 'gaming' is occurring. Consider a simplified example* of an item receiving ratings of 100, 50, & 0. The mean average rating would be 50. However, ratings of 55, 50 & 45 could also result in the same average. The second average might be more trusted because there is more consensus around a particular rating (a lower deviation).
(*In practice, some albums can have several thousand ratings)
This album is rated in the top 5% of all albums on BestEverAlbums.com. This album has a Bayesian average rating of 76.8/100, a mean average of 76.4/100, and a trimmed mean (excluding outliers) of 77.0/100. The standard deviation for this album is 14.3.

Beyond the border of my musical taste. I can live without this..

Whilst 1995’s ‘Ladies and Gentlemen . . ‘ is considered Jason Pierces masterpiece I much prefer the X factor this album brings, there’s just something magical going on here I can’t quite put my finger on

The nearest touch point would be something like ‘Screamadelica’ released the year prior with similar aesthetics in production and mood. In fact ‘ Laser Guided Melodies’ may well be the best produced album ever made

One of the most cohesive and mind-blowing album listening experiences to listen to. There are plenty of good albums out there, but this is one of those few that has that certain extra magic ingredient. The best way I can describe it is that they know when to NOT play. This is the same ingredient that gives Bon Iver's "For Emma, Forever Ago" its mystical feel, the same ingredient that makes Talk Talk's "Laughing Stock" the best album of all time (in my mind). This album has the perfect amount of layers, no more, no less. Like floating in a liquid substance that is your exact density. Suspended, motionless, floating, dreaming. Lord Shine A Light On Me

Sensitive and gloomy... like being lost in a dream that makes you feel sad but you don't exactly want to get out of bed. Very unique sound.

Listening to this was borderline religious. It's often layered, but it's never muddy. Each note seems to be in a near perfect place and the production shines through, even on my shitty earbuds.

Even in life there's a closing scene.

If ever an album was made for listening to in the dark with a decent pair of headphones, this is it. Substances may also help. It's like having your brain kissed through your ears. Bliss.

The album, which falls into the 'shoegazing' genre, skillfully combines free-form jazz and plaintiff melodies utilizing a variety of percussion and strings. Jason Pierce's use of drones and layers of tremolos create hypnotic lullabies and majestic symphonies that are accentuated with a clever use of technology. Whether the latter is an alibi for what some describe as Pierce's 'contrived' "art", is arguably made redundant such is the emotional punch of the music, particularly the sublime baroque extravaganza, 'Shine A Light'.

Your feedback for Lazer Guided Melodies