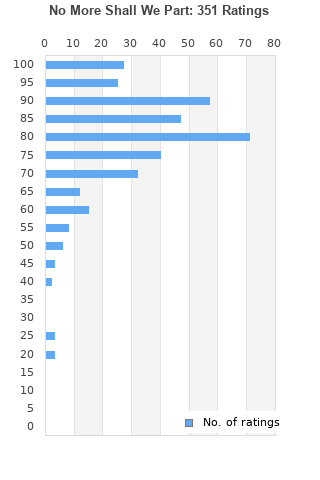 No More Shall We Part is ranked 8th best out of 27 albums by Nick Cave & The Bad Seeds on BestEverAlbums.com.

The best album by Nick Cave & The Bad Seeds is The Boatman's Call which is ranked number 386 in the list of all-time albums with a total rank score of 4,944.

Listen to No More Shall We Part on YouTube 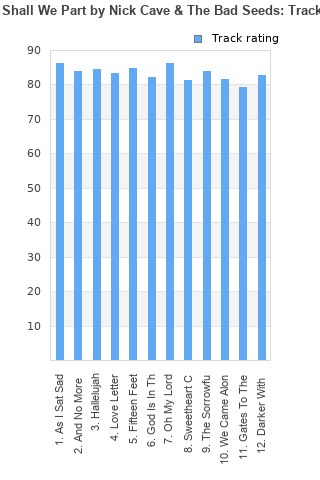 No More Shall We Part rankings

No More Shall We Part collection

No More Shall We Part ratings

Rating metrics: Outliers can be removed when calculating a mean average to dampen the effects of ratings outside the normal distribution. This figure is provided as the trimmed mean. A high standard deviation can be legitimate, but can sometimes indicate 'gaming' is occurring. Consider a simplified example* of an item receiving ratings of 100, 50, & 0. The mean average rating would be 50. However, ratings of 55, 50 & 45 could also result in the same average. The second average might be more trusted because there is more consensus around a particular rating (a lower deviation).
(*In practice, some albums can have several thousand ratings)
This album is rated in the top 2% of all albums on BestEverAlbums.com. This album has a Bayesian average rating of 80.3/100, a mean average of 79.5/100, and a trimmed mean (excluding outliers) of 80.6/100. The standard deviation for this album is 14.5.

No More Shall We Part favourites

No More Shall We Part comments

Another fantastic release from a musical genius who is extremely consistent with his records. The lyrics are where this record shine with this dark and depressing undertone which is backed up very well by his vocal. He gives his classic deep and melancholic delivery that suits this style of music perfectly. The instrumental is raw and a bit rough in places which is enjoyable to see in a period of time where most albums are so clean cut and generic. This makes the album feel unique and it is also a very cohesive listen due to its consistency. Overall, Nick Cave & The Bad Seeds are fantastic and this only adds to their quality filled discography.

Nick Cave is a bit of a genius isn't he? His lyrics just get to you. This is one of his mellower albums, but the bite of his words (especially on tracks such as God Is In The House and Oh My Lord) just cuts through.

The LP has two extra tracks, only being found here? Anyway, this could be one way to reclaim the albums and increase their market share in this digital world. None of them could though match the originals quality.... but being ok.

So sublime you really feel the pain he must have been going thru an emotional time when he recorded this. The atmosphere is almost like being at a wake - as though something terrible happened but you still want to celebrate !

Another smashing Nick Cave album, his releases never fail to disappoint and No More Shall We Part is no exception .

a really beautiful album. This instrumental work is better than a lot of his other stuff. This also has a lot more passion and flow than his more acclaimed "Boatmans Call"

Nick is no pianoplayer he claims. He said he wasn't satisfied with his pianocontribution on this album. I'm loving the incomplete roughness of it. It's brilliant. And such lovely stories in a matching musical context. And Nick sings like never before.

Listened to this for the first time, it left a huge impression. This album is just so wonderful, like a soundtrack to a dark fairytale. And I'm yet to pay greater attention to the lyrics. Piano and violin are truly extraordinary here.

I've never heard anything like this. I need to listen to more Nick Cave albums.

Your feedback for No More Shall We Part