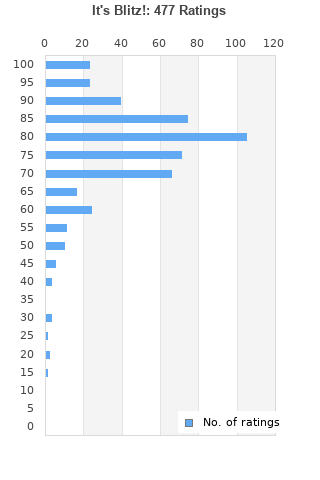 YEAH YEAH YEAHS IT'S BLITZ CD
Condition: Good
Time left: 1d 11h 58m 32s
Ships to: Worldwide
£3.25
Go to store
Product prices and availability are accurate as of the date indicated and are subject to change. Any price and availability information displayed on the linked website at the time of purchase will apply to the purchase of this product.  See full search results on eBay

It's Blitz! is ranked 2nd best out of 6 albums by Yeah Yeah Yeahs on BestEverAlbums.com.

The best album by Yeah Yeah Yeahs is Fever To Tell which is ranked number 620 in the list of all-time albums with a total rank score of 3,073. 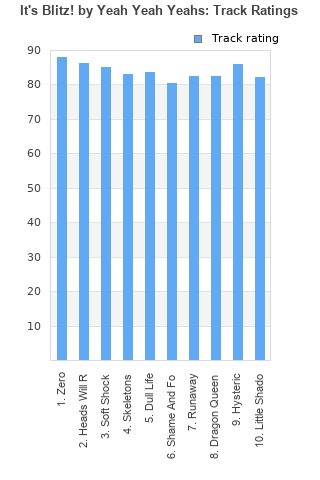 Rating metrics: Outliers can be removed when calculating a mean average to dampen the effects of ratings outside the normal distribution. This figure is provided as the trimmed mean. A high standard deviation can be legitimate, but can sometimes indicate 'gaming' is occurring. Consider a simplified example* of an item receiving ratings of 100, 50, & 0. The mean average rating would be 50. However, ratings of 55, 50 & 45 could also result in the same average. The second average might be more trusted because there is more consensus around a particular rating (a lower deviation).
(*In practice, some albums can have several thousand ratings)
This album is rated in the top 4% of all albums on BestEverAlbums.com. This album has a mean average rating of 77.0/100. The trimmed mean (excluding outliers) is 77.9/100. The standard deviation for this album is 13.3.

Almost half a decade ago, I was a 15 year old who thought this record was just "great". Today I realised it's things like this that make me feel alive.

My favorite album from 2009 & my second favorite YYY album behind Show Your Bones . Every song bar Dragon Queen ( which feels Fillerish) is great. Released on January 1st 2009 It’s Blitz stands the test of time some 9 years later

Best Yeah Yeah Yeahs album since the debut. More electronic textures this time, with their best set of songs for a while. Excellent record.

still not as good as fever to tell but better than most albums of the decade.

Yeah, Yeah, Yeahs meets electronics.
And it's a good melt.

YYY's best album for me. Combines the best parts of FTT and SYB- nice electronic effort that still showcases Karen O's great voice. My favourites are: runaway, heads will roll, zero and skeletons.

Not got the visceral energy that Fever To Tell had, but still superb.

The right balance between gorgeous and moody.

Extremely good album found myself playing it constantly until I got tired of it . Good song Heads Will Roll

Not the band's best, but this is still a way solid album. Not a bad track anywhere. Some are weaker than others, and maybe there aren't the same highs of which the group is otherwise capable, but a great album either way.

Your feedback for It's Blitz!