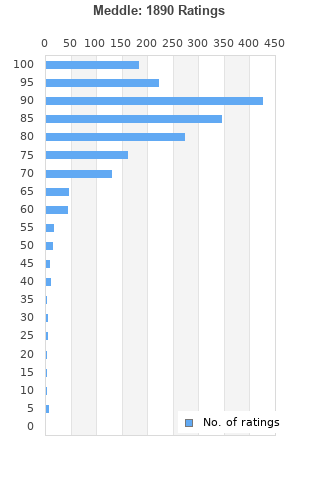 Meddle is ranked 5th best out of 36 albums by Pink Floyd on BestEverAlbums.com.

The best album by Pink Floyd is The Dark Side Of The Moon which is ranked number 2 in the list of all-time albums with a total rank score of 89,531. 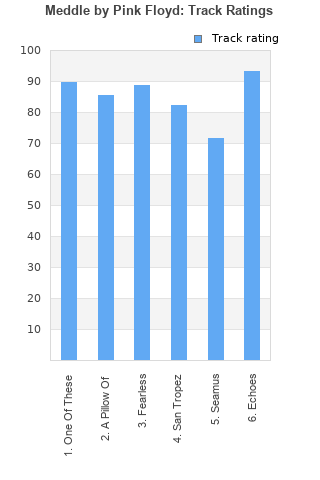 Rating metrics: Outliers can be removed when calculating a mean average to dampen the effects of ratings outside the normal distribution. This figure is provided as the trimmed mean. A high standard deviation can be legitimate, but can sometimes indicate 'gaming' is occurring. Consider a simplified example* of an item receiving ratings of 100, 50, & 0. The mean average rating would be 50. However, ratings of 55, 50 & 45 could also result in the same average. The second average might be more trusted because there is more consensus around a particular rating (a lower deviation).
(*In practice, some albums can have several thousand ratings)
This album is rated in the top 1% of all albums on BestEverAlbums.com. This album has a Bayesian average rating of 84.4/100, a mean average of 83.6/100, and a trimmed mean (excluding outliers) of 84.5/100. The standard deviation for this album is 13.0.

A very good album that should be considered among Pink Floyd's greats. Its A-side is good but its B-side propels the album (and band) to completely uncharted territory for a song (Echoes) that was easily their greatest up to that point - and a contender for their greatest overall.

The beginning of Floyd's classic period , this album showcases their growth as artists

Very good but not as epic as others. It does have some great tracks on it, 'Fearless' being my pick of the bunch. I've listened to it hundreds of times so I feel I can confidently say 'Echoes' is a bit over rated. Just my opinion, that's all.

Find myself wanting to skip over both San Tropez and Seamus, but what's left is amongst my favorite work in the Pink Floyd catalog.

A lot of incredible music on here, but there are just a couple of poor tracks that let the album down a touch.

I like this album, their is something unique about it. The first three tracks are really good, and the last track is the icing on the cake.

Another favorite from the LSD days.

A strange collection of songs. On Of These Days is a great song that gives you a weird sense of urgency.

Then A Pillow Of Winds to Seamus seems like it's from a completely different album, but the music is very enjoyable.

Echoes is of course a standout track that has its similarities with both the opening song and the rest of the album but also adds its own sound.

Not their most corehent album but that doesn't affect the quality of the songs which is mostly very high.

Your feedback for Meddle