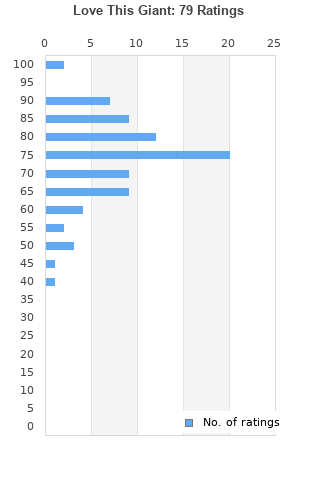 Love This Giant is ranked as the best album by David Byrne & St. Vincent. 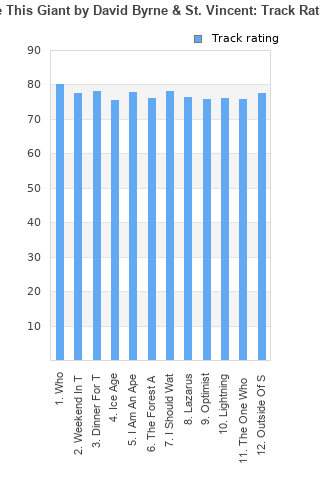 Rating metrics: Outliers can be removed when calculating a mean average to dampen the effects of ratings outside the normal distribution. This figure is provided as the trimmed mean. A high standard deviation can be legitimate, but can sometimes indicate 'gaming' is occurring. Consider a simplified example* of an item receiving ratings of 100, 50, & 0. The mean average rating would be 50. However, ratings of 55, 50 & 45 could also result in the same average. The second average might be more trusted because there is more consensus around a particular rating (a lower deviation).
(*In practice, some albums can have several thousand ratings)
This album has a Bayesian average rating of 73.8/100, a mean average of 73.9/100, and a trimmed mean (excluding outliers) of 73.9/100. The standard deviation for this album is 11.8.

If you're familiar with the musical styles of david byrne (of the talking heads) and st. vincent, then you may be interested to know that this album falls more in line with byrne's disjointed, funky style than vincent's melodramatic flair. While the talking heads never employed an accompanyment of horns, they work quite well here as if a heads-extension Aside from that similarity, byrne and vincent alternate lead vocals. Some songs work better than others, but none "take off" in a way a major byrne or vincent (or both) fan might anticipate with such a pairing. I'd say the Byrne-led songs are better -- they have more melodic, musical and lyrical focus ("who", "i am an ape" and "lazarus" come to mind). Cool "cool water" vocals by st. vincent on "lazarus", the album's best track.

Your feedback for Love This Giant