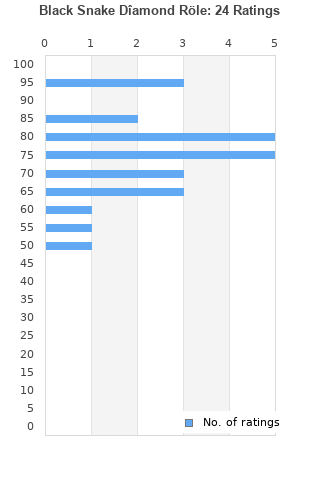 Black Snake Dîamond Röle is ranked 3rd best out of 28 albums by Robyn Hitchcock on BestEverAlbums.com.

The best album by Robyn Hitchcock is I Often Dream Of Trains which is ranked number 6685 in the list of all-time albums with a total rank score of 192. 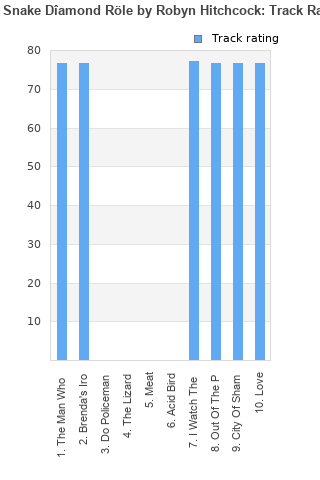 0
4.
The Lizard
Rating: Not enough dataComments:

Rating metrics: Outliers can be removed when calculating a mean average to dampen the effects of ratings outside the normal distribution. This figure is provided as the trimmed mean. A high standard deviation can be legitimate, but can sometimes indicate 'gaming' is occurring. Consider a simplified example* of an item receiving ratings of 100, 50, & 0. The mean average rating would be 50. However, ratings of 55, 50 & 45 could also result in the same average. The second average might be more trusted because there is more consensus around a particular rating (a lower deviation).
(*In practice, some albums can have several thousand ratings)
This album is rated in the top 16% of all albums on BestEverAlbums.com. This album has a Bayesian average rating of 74.8/100, a mean average of 75.7/100, and a trimmed mean (excluding outliers) of 75.7/100. The standard deviation for this album is 10.8.

One can well imagine that if Syd Barrett had continued to write and record music, some of it might have sounded like Robyn Hitchcock. At any rate it is obvious that Hitchcock is very inspired by Barrett, and his vocal phrasings are often similar to those of Barrett.

This album was Hitchcock's first solo release after the dissolution of the band The Soft Boys and Hitchcock shines with having written all material on the album; including the eight bonus tracks. Moreover, the songwriting is at a high level, and only very few numbers seem unimportant. If you are not already familiar with Hitchcock's music, it may take some time to get an overview of the eighteen numbers, which, besides being in debt to Syd Barret, also have borrowed a portion from the melodic early punk, Alex Chilton and sixties bands like the Who and the Velvet Underground.

The ten original tracks are generally fine, but a few songs should be highlighted - f.x. the catchy opening "The Man Who Invented Himself". Also the Pink Floyd inspired "Brenda's Iron Sledge", the melodic Who inspired "Out of the Picture" and not least the final number, and the only ballad "Love " stand out.

The bonus-tracks are for the most part fully in line with the original ten tracks, and also here several could be highlighted. I will bring forward two of the slower songs, the evocative "A Skull, a Suitcase and a Long Bottle of Wine" and "It was the Night", which might well go for an Alex Chilton recording.

An exciting album which belong among the most recognized in his extensive production; partly as a soloist or as part of the bands the Soft Boys and The Egyptians.