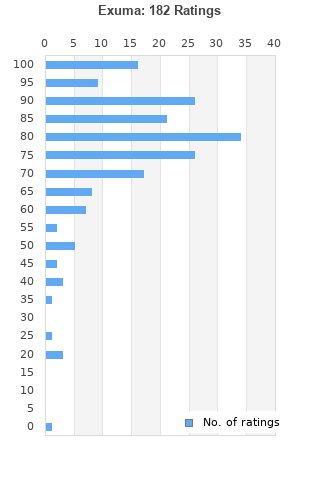 Exuma is ranked as the best album by Exuma.

Sub-Radio - The 1990 Something Tour
The Foundry, Philadelphia, United States. 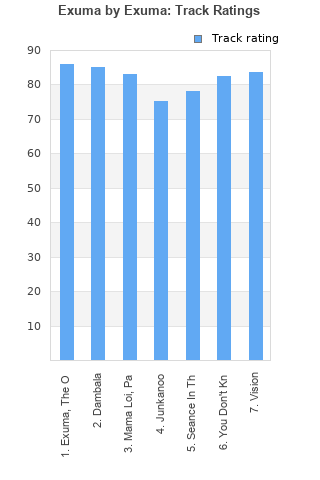 Rating metrics: Outliers can be removed when calculating a mean average to dampen the effects of ratings outside the normal distribution. This figure is provided as the trimmed mean. A high standard deviation can be legitimate, but can sometimes indicate 'gaming' is occurring. Consider a simplified example* of an item receiving ratings of 100, 50, & 0. The mean average rating would be 50. However, ratings of 55, 50 & 45 could also result in the same average. The second average might be more trusted because there is more consensus around a particular rating (a lower deviation).
(*In practice, some albums can have several thousand ratings)
This album is rated in the top 2% of all albums on BestEverAlbums.com. This album has a Bayesian average rating of 78.9/100, a mean average of 77.5/100, and a trimmed mean (excluding outliers) of 79.3/100. The standard deviation for this album is 17.2.

This isn't an album that I can just listen to in the background. Whenever it comes on it puts me into a trance.

No album has done atmosphere better than this one. When I hear this album, I AM in the Bahamas, lost in the woods as I happen upon a circle of people with musical instruments of all kinds. In the center of the north of the circle is a man with a guitar. He cuts through the sound of frogs with ferocious guitar playing, with the drummers following suit. Nature sings with him as he boasts and bellows about his power as an ancient deity.

From here the circle goes on a wild journey, one with heavenly prophecies, contacting the dead, and a zombie apocalypse.

I can't listen to this album enough. I cannot recommend it enough. I only wish that it did not have "junkanoo" which is a useless filler track.

its like in the court of the crimson king but from a different culture. also its amazing

A strange but entrancing album carried by the passion of vocalist.

Deep within a mythical tropical island lies a man performing with the passion of Richie Havens.

Not my cup of tea, I appreciate it however, and by no means dislike it, I just don't think I'll be listening to it again very soon.

Arguably my favorite world album ever

Your feedback for Exuma