Mind Bomb (studio album) by The The 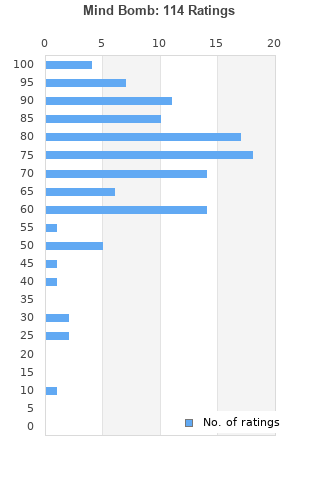 The The. - Mind Bomb - The The. CD OCVG Free Postage
Condition: Very Good
Time left: 9h 50m 54s
Ships to: Worldwide
£8.99
Go to store
Product prices and availability are accurate as of the date indicated and are subject to change. Any price and availability information displayed on the linked website at the time of purchase will apply to the purchase of this product.  See full search results on eBay

Mind Bomb is ranked 3rd best out of 10 albums by The The on BestEverAlbums.com.

The best album by The The is Soul Mining which is ranked number 998 in the list of all-time albums with a total rank score of 1,870. 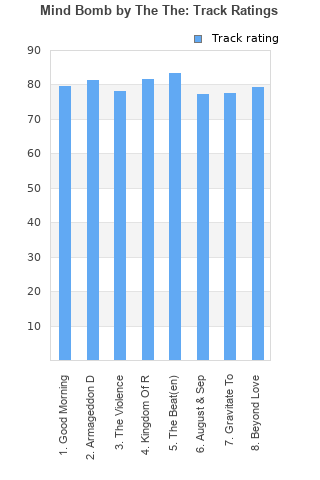 Rating metrics: Outliers can be removed when calculating a mean average to dampen the effects of ratings outside the normal distribution. This figure is provided as the trimmed mean. A high standard deviation can be legitimate, but can sometimes indicate 'gaming' is occurring. Consider a simplified example* of an item receiving ratings of 100, 50, & 0. The mean average rating would be 50. However, ratings of 55, 50 & 45 could also result in the same average. The second average might be more trusted because there is more consensus around a particular rating (a lower deviation).
(*In practice, some albums can have several thousand ratings)
This album is rated in the top 12% of all albums on BestEverAlbums.com. This album has a Bayesian average rating of 75.5/100, a mean average of 74.4/100, and a trimmed mean (excluding outliers) of 75.8/100. The standard deviation for this album is 15.7.

Easily the best album by The The. Matt Johnson manages to be all apocalyptic and political on songs like Armageddon Days, makes social comment on the single The Beaten Generation and then gets all personal and intense on August and September and the mighty Gravitate To Me. My friend Sarah at school used to call him Matt " the God " Johnson. I wouldn't go that far but this album is a real good showcase for his talent. One of the better albums of the 80's. And its themes are still relevant today.

Matt Johnson celebrates the end of the eighties with a set of intense songs about God, love and war - none of which would work at all well on the X-factor.

I have always been a big fan of The The, but for some reason I always looked over this album. One night I decided to listen to this and realize for what it really is-a dark, brooding masterpiece with lustful, atheist, emotional, and thought-provoking lyrics. The only problem with this album is that The Beat(en) Generation sounds totally out of place on this album, still not a bad song. Another masterpiece by Matt Johnson.

Armageddon Days is a great song

I'm confused as to what to think of this album. It has a couple of really good moments and then a bunch of really cheesy moments.... It's like, hard to decide.

Your feedback for Mind Bomb