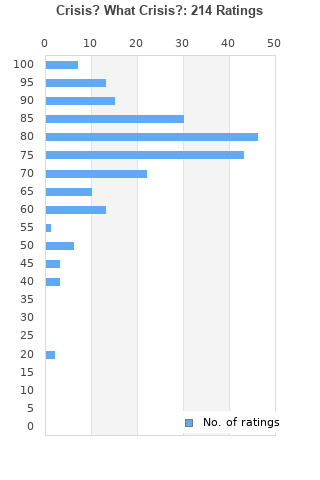 Crisis? What Crisis? is ranked 4th best out of 18 albums by Supertramp on BestEverAlbums.com.

The best album by Supertramp is Crime Of The Century which is ranked number 269 in the list of all-time albums with a total rank score of 7,423. 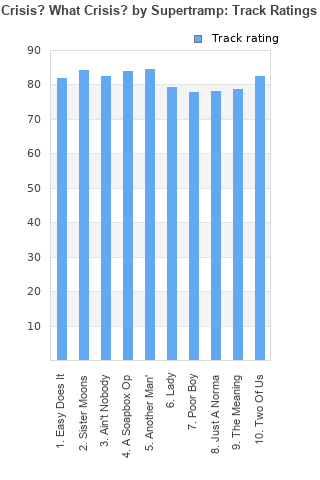 Rating metrics: Outliers can be removed when calculating a mean average to dampen the effects of ratings outside the normal distribution. This figure is provided as the trimmed mean. A high standard deviation can be legitimate, but can sometimes indicate 'gaming' is occurring. Consider a simplified example* of an item receiving ratings of 100, 50, & 0. The mean average rating would be 50. However, ratings of 55, 50 & 45 could also result in the same average. The second average might be more trusted because there is more consensus around a particular rating (a lower deviation).
(*In practice, some albums can have several thousand ratings)
This album is rated in the top 7% of all albums on BestEverAlbums.com. This album has a Bayesian average rating of 76.3/100, a mean average of 76.1/100, and a trimmed mean (excluding outliers) of 76.5/100. The standard deviation for this album is 12.6.

It’s arguably my favourite Supertramp album, with many great songs that shouldn’t be overlooked.

First listen I was really surprised ! Nobody told me this album was this good !! I like all the songs from Easy Does It to Lady. However, I find the last tracks not as good and this is why I think it’s less consistent than BIA, COTC and EITQM. It misses a great closer like Crime of the Century, Child if Vision or Fool’s Overture.

Standouts: Ain’t Nobody but Me, A Soapbox Opera, Another Man’s Woman

This might be Supertramp's best album. There are some OK songs in here, but most of them are outstanding. 9+/10.

Why are people disappointed with this album? For me it is almost at par with Crime of the Century and above Breakfast in America. In songs like "A sopabox opera", "Another man's woman" or "Just a normal day" Hodgson and Davies keep a dialogue in which their voices shine between the piano, the violins and the saxophone, with different crescendoes and releaxing moments with keep the album entertaining and at the same time musically interesting.

Disappointing. Nowhere near the quality of, crime of the century, or the yet to be released, breakfast in America. It's all very boring, safe and middle of the road. Easy listening, but who wants that? Average.

Not on par with Breakfast or Crime.

Your feedback for Crisis? What Crisis?