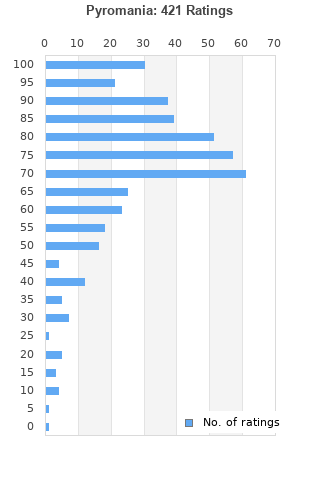 Pyromania is ranked 2nd best out of 19 albums by Def Leppard on BestEverAlbums.com.

The best album by Def Leppard is Hysteria which is ranked number 538 in the list of all-time albums with a total rank score of 3,446. 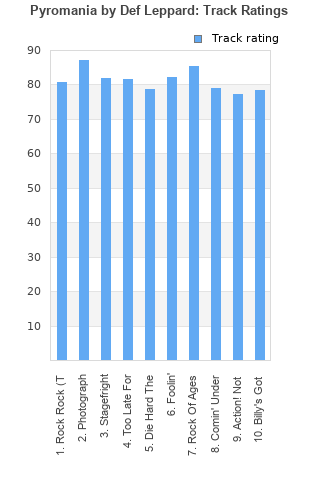 Rating metrics: Outliers can be removed when calculating a mean average to dampen the effects of ratings outside the normal distribution. This figure is provided as the trimmed mean. A high standard deviation can be legitimate, but can sometimes indicate 'gaming' is occurring. Consider a simplified example* of an item receiving ratings of 100, 50, & 0. The mean average rating would be 50. However, ratings of 55, 50 & 45 could also result in the same average. The second average might be more trusted because there is more consensus around a particular rating (a lower deviation).
(*In practice, some albums can have several thousand ratings)
This album has a Bayesian average rating of 72.9/100, a mean average of 71.9/100, and a trimmed mean (excluding outliers) of 72.9/100. The standard deviation for this album is 19.6.

A couple of great songs thrown in with a bunch of B side tracks that really drag the quality down. For some reason the songs on here just don't sit right with me and I can never properly get into any of the tracks even the big hits. They are obviously good but they just don't blow me away at all and I feel like I have heard this exact sound done many times before and the other records were much more successful in creating the style Def Leppard are going for. The instrumentation is also pretty simplistic and feels bare at times. It lacks an infectious side as well and the choruses don't push the songs they are on to a new level. Despite this, there is some fantastic guitar work on here which can rival the greats of this genre. I do think the vocal fits the style of music perfectly as well and is a massive positive about this record. Overall, I really struggle with getting into this album as I don't think it is doing or attempting anything fantastic and most of the songs are just decent or average which leaves an unsatisfied feel for me.

I really like Rock of Ages and Photograph is pretty alright as well, but the rest sound like third rate AC/DC tracks. There's also something that's so unsatisfying to me about every single one of their songs, like they're never quite the way you think they would or should be. Bit of a shame since the guitarists in this band have always been extremely talented and underutilized somewhat.

Good at what they do if you like that sort of thing. Corny and silly, yes, but fun. I suppose.

Their Masterpiece! Even better than "Hysteria", because here is not even one weaker song and of Course because it's heavier.

There's nothing wrong with the songs on this album, I know I'm alone here, but I just don't like the Def Leppard sound.

It's awesome and it's better than Hysteria.

Your feedback for Pyromania