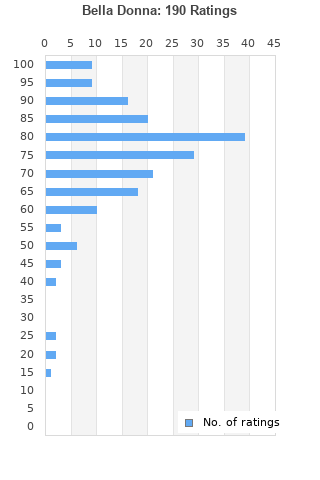 2x Stevie Nicks Cassette Tapes - Bella Donna and The Wild Heart
Condition: Very Good
Time left: 3h 37m 17s
Ships to: Worldwide
$11.99
Go to store
Product prices and availability are accurate as of the date indicated and are subject to change. Any price and availability information displayed on the linked website at the time of purchase will apply to the purchase of this product.  See full search results on eBay

Bella Donna is ranked as the best album by Stevie Nicks. 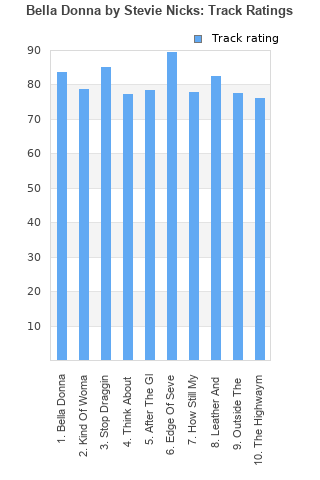 Rating metrics: Outliers can be removed when calculating a mean average to dampen the effects of ratings outside the normal distribution. This figure is provided as the trimmed mean. A high standard deviation can be legitimate, but can sometimes indicate 'gaming' is occurring. Consider a simplified example* of an item receiving ratings of 100, 50, & 0. The mean average rating would be 50. However, ratings of 55, 50 & 45 could also result in the same average. The second average might be more trusted because there is more consensus around a particular rating (a lower deviation).
(*In practice, some albums can have several thousand ratings)
This album is rated in the top 13% of all albums on BestEverAlbums.com. This album has a Bayesian average rating of 75.4/100, a mean average of 74.4/100, and a trimmed mean (excluding outliers) of 75.6/100. The standard deviation for this album is 16.6.

Although mired in 80s sound and production, Stevie's first solo is still a great album and her best outside Fleetwood Mac.

I was really surprised by this one. It's a real grower. This is an extremely consistent and strong album. Some really good songs here. The title track, and, The highwayman, are excellent and the rest is fine too. It's a good album, certainly better than Fleetwood Mac's, Mirage, album the following year.

Worth a listen, If you like Fleetwood Mac then you should listen to this.

Not a bad solo debut a very popular female artist terrific voice one of my favourites her best material seems to be on Fleetwood Mac albums other than 'Edge of Seventeen' featured here.

Stevie’s first solo effort is her best, with a group of Fleetwood-Mac-worthy songs. Really captures her passion and mystery. Best songs are the two singles, “Edge of Seventeen” and the Petty duet “Stop Draggin' My Heart Around,” the lovely “Kind of Woman,” and “Outside the Rain,” but good throughout.

I like anything Fleetwood Mac, Stevie solo is almost as good but definitely too much of the 80's pop sound. The Tom Petty and Don Henley duets are 2 of the best I've heard.

mystical and sexy,sexy,sexy...dig it all

Your feedback for Bella Donna