The Pick Of Destiny (album) by Tenacious D 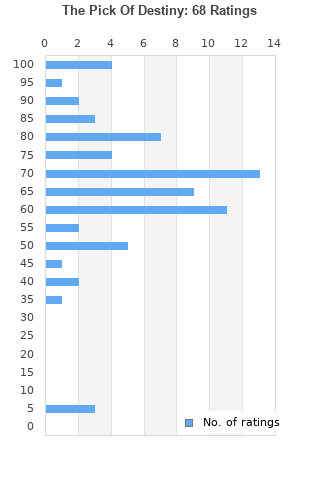 Tenacious D - The Pick of Destiny Vinyl LP (EPIC MOVATM016)
Condition: New
Time left: 9h 10m 38s
Ships to: Worldwide
£32.99
Go to store
Product prices and availability are accurate as of the date indicated and are subject to change. Any price and availability information displayed on the linked website at the time of purchase will apply to the purchase of this product.  See full search results on eBay

The Pick Of Destiny is ranked 2nd best out of 4 albums by Tenacious D on BestEverAlbums.com.

The best album by Tenacious D is Tenacious D which is ranked number 3352 in the list of all-time albums with a total rank score of 432. 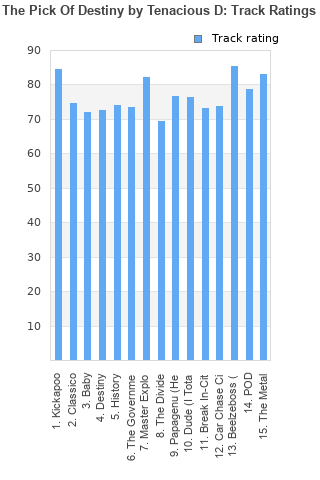 The Pick Of Destiny rankings

The Pick Of Destiny collection

The Pick Of Destiny ratings

Rating metrics: Outliers can be removed when calculating a mean average to dampen the effects of ratings outside the normal distribution. This figure is provided as the trimmed mean. A high standard deviation can be legitimate, but can sometimes indicate 'gaming' is occurring. Consider a simplified example* of an item receiving ratings of 100, 50, & 0. The mean average rating would be 50. However, ratings of 55, 50 & 45 could also result in the same average. The second average might be more trusted because there is more consensus around a particular rating (a lower deviation).
(*In practice, some albums can have several thousand ratings)
This album has a mean average rating of 66.0/100. The trimmed mean (excluding outliers) is 65.7/100. The standard deviation for this album is 20.4.

The Pick Of Destiny favourites

The Pick Of Destiny comments

This is supposed to be a comedy album/soundtrack, why is it so rocking? Kickapoo, Master Exploder, Beelzeboss, The Metal... and if i'm being honest, the second half of Papagenu isn't bad either.

Fairly decent for a soundtrack, a lot of throwaway tracks though.

Great album as well as a great soundtrack!

Fun for a soundtrack but nothing spectacular here. More funny than anything else. That being said, Kickapoo, Master Exploder, and The Metal are actually pretty sick tunes.

Your feedback for The Pick Of Destiny