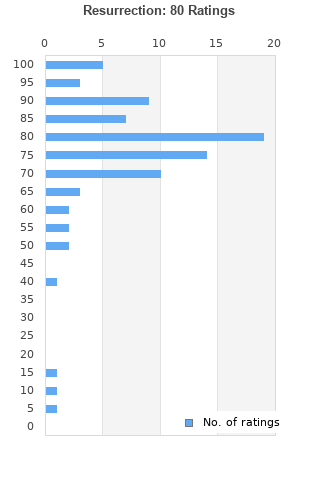 Common Sense ‎– Resurrection
Condition: Used
Time left: 1d 23h 36m 33s
Ships to: Worldwide
$25.00
Go to store
Product prices and availability are accurate as of the date indicated and are subject to change. Any price and availability information displayed on the linked website at the time of purchase will apply to the purchase of this product.  See full search results on eBay

Resurrection is ranked as the best album by Common Sense. 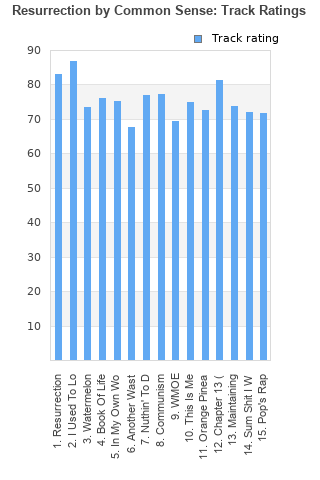 Rating metrics: Outliers can be removed when calculating a mean average to dampen the effects of ratings outside the normal distribution. This figure is provided as the trimmed mean. A high standard deviation can be legitimate, but can sometimes indicate 'gaming' is occurring. Consider a simplified example* of an item receiving ratings of 100, 50, & 0. The mean average rating would be 50. However, ratings of 55, 50 & 45 could also result in the same average. The second average might be more trusted because there is more consensus around a particular rating (a lower deviation).
(*In practice, some albums can have several thousand ratings)
This album is rated in the top 4% of all albums on BestEverAlbums.com. This album has a Bayesian average rating of 77.6/100, a mean average of 75.6/100, and a trimmed mean (excluding outliers) of 78.2/100. The standard deviation for this album is 17.4.

Common Sense - Resurrection is his second album and what a difference did these two years make. It's like he is a different man, the improvement is unreal. The production may appear simplistic and too 90's, but it gives Common plenty of room to shine, which is the main point of the album. The lyrics are easily the highlight of the album. The obvious one would be I Used To Love H.E.R., a brilliant way to showcase hip hop's development through the years ("I might've failed to mention that this chick was creative Once the man got to her, he altered her native Told her if she got an image and a gimmick That she could make money, and she did it like a dummy Now I see her in commercials, she's universal She used to only swing it with the inner-city circle Now she be in the burbs, lookin' rock and dressin' hippie And on some dumb shit when she comes to the city"), but pretty much every track has a message -it's equally impressive both in terms of content i.e. what he has to say and how he does it i.e. his rhymes, metaphors, etc.- to deliver ("I want a job but I ain't lookin' (how come?) I ain't tryin' to degrade myself, bein' nobody's Calvin I'm a couch bum What makes it bad, I had incentive But that disintegrated to a state that stagnated I procrastinated I can't recall a day without bein' intoxicated, or blowed I'm dealin' with a full deck, at any day I can fold What makes it bad, I wasn't dealt that bad a hand And I had a plan But things didn't go through The way they were supposed to Thank God I found you"). Despite the power of his words, he has this gentle and tactful delivery that could be perceived as somewhat dull, but I've never had any problem with it. It may not excite you initially, but I think the more you listen to it the more it will grow on you.

Most people commenting here have no idea what the hell they're talking about. Get out of here, simpletons. A mind filled with self-imposed ignorance should remain silent.

This is a hip hop classic. Not every song is perfect sure, but it's got some strong moments with Resurrection and I Used to Love Her. His lyrics are real and stray from the gangster clichés which is always refreshing, especially since it was released in 94. The jazzy beats also grab my attention.

I did exaggerate my rating yes. I'd give this an 80-85 but too many people downplaying this out of stupidity.

the kind of music you can just sit and relax too. he's got soothing yet fun voice

Just saw my comment from a few years back. After a solid relisten, I still don't think it's that great. Common had much better work afterwards. I Used to Love H.E.R. is a hip-hop classic though and the obvious gem in the bunch.

common suffers from being boring and monotonous at times, its like his voice is TOO smooth that you forget youre listening to it. either way his writing ability and poetic take on hip-hop cannot be ignored, where would we be without "I Used to Love H.E.R."?

Your feedback for Resurrection