Hold Your Fire (album) by Rush 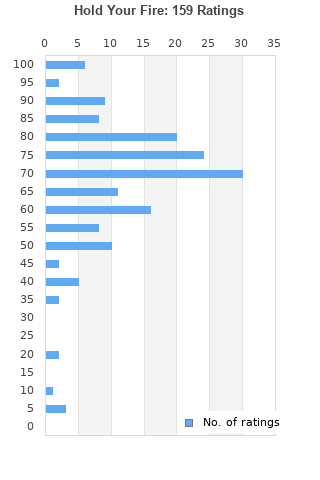 Hold Your Fire is ranked 15th best out of 35 albums by Rush on BestEverAlbums.com.

The best album by Rush is Moving Pictures which is ranked number 151 in the list of all-time albums with a total rank score of 12,198. 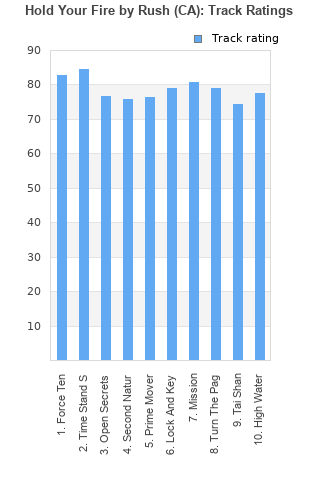 Rating metrics: Outliers can be removed when calculating a mean average to dampen the effects of ratings outside the normal distribution. This figure is provided as the trimmed mean. A high standard deviation can be legitimate, but can sometimes indicate 'gaming' is occurring. Consider a simplified example* of an item receiving ratings of 100, 50, & 0. The mean average rating would be 50. However, ratings of 55, 50 & 45 could also result in the same average. The second average might be more trusted because there is more consensus around a particular rating (a lower deviation).
(*In practice, some albums can have several thousand ratings)
This album has a mean average rating of 68.0/100. The trimmed mean (excluding outliers) is 69.7/100. The standard deviation for this album is 17.8.

Not a very good album.

Many complain about this album being to synth-heavy, something that would usually turn me off as well, but I find this to be a horribly underrated album. Rush proves they can make great music no matter what sound and mood they use. The first 8 cuts are all positively stellar. Geddy again shows brilliance in bass, especially on 'Turn the Page.'

It's Power Windows Mark II, which is not a bad thing at all. This used to be my favorite Rush album, but I can't overlook the mid-tempo mediocrity of songs like "Prime Mover" and "High Water". The songs can get a little samey on this album until you listen to them enough.

With that said, "Force Ten" is a driving rocker with great bass and drums. A suiting opener. "Time Stand Still" isn't as bad as some people say - I like the duet a lot. "Lock and Key" is probably my favorite Rush song. It goes through numerous phases and is just packed with power. The synth opening is just perfect, and the guitar solo is appropriately climactic. It's kind of an irrational favorite of mine, but I just feel the song "works" on every level. I'd change nothing about it.

"Mission" is packed with emotion and is a sign of what was to come on Presto. "Turn the Page" is a fun bass workout.

Force Ten, Mission and Tai Shan were the best.

Your feedback for Hold Your Fire