All The World's A Stage (live album) by Rush 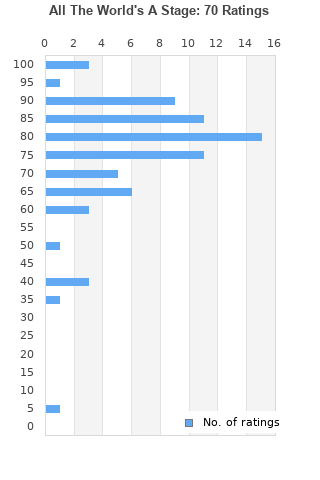 All The World's A Stage is ranked 19th best out of 37 albums by Rush on BestEverAlbums.com.

The best album by Rush is Moving Pictures which is ranked number 150 in the list of all-time albums with a total rank score of 11,384.

Listen to All The World's A Stage on YouTube 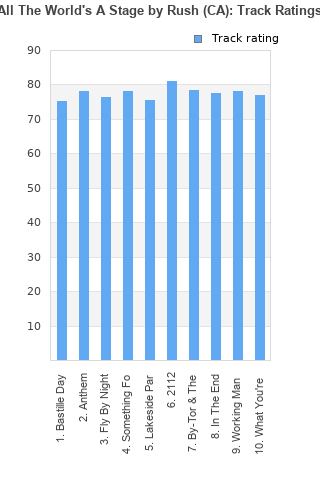 All The World's A Stage rankings

All The World's A Stage collection

All The World's A Stage ratings

Rating metrics: Outliers can be removed when calculating a mean average to dampen the effects of ratings outside the normal distribution. This figure is provided as the trimmed mean. A high standard deviation can be legitimate, but can sometimes indicate 'gaming' is occurring. Consider a simplified example* of an item receiving ratings of 100, 50, & 0. The mean average rating would be 50. However, ratings of 55, 50 & 45 could also result in the same average. The second average might be more trusted because there is more consensus around a particular rating (a lower deviation).
(*In practice, some albums can have several thousand ratings)
This album is rated in the top 6% of all albums on BestEverAlbums.com. This album has a Bayesian average rating of 76.4/100, a mean average of 75.9/100, and a trimmed mean (excluding outliers) of 76.9/100. The standard deviation for this album is 15.9.

All The World's A Stage favourites

All The World's A Stage comments

One of the very greatest live albums. When that guitar riff kicks in on 'In the End' is one of my favourite moments in music. (Weird huh?).

Good introduction to their early albums with a sampling of the best tracks from each.

Heavy rock bands usually do decent live albums and this is no exception. I also like Rush's predictability in the early days (lost now) of 4 studios, then double live album. This is a great summary of their early stuff - Bastille Day, By-Tor and 2112 get a good airing.

Your feedback for All The World's A Stage