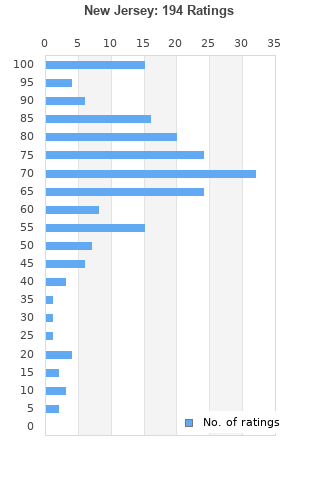 Bon Jovi - New Jersey - CD - New
Condition: Brand New
Time left: 20m 32s
Ships to: Worldwide
£8.71
Go to store
Product prices and availability are accurate as of the date indicated and are subject to change. Any price and availability information displayed on the linked website at the time of purchase will apply to the purchase of this product.  See full search results on eBay

New Jersey is ranked 2nd best out of 20 albums by Bon Jovi on BestEverAlbums.com.

The best album by Bon Jovi is Slippery When Wet which is ranked number 763 in the list of all-time albums with a total rank score of 2,455. 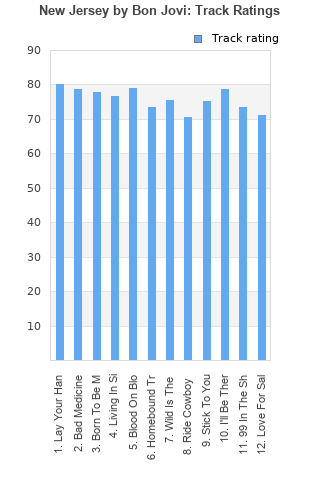 Rating metrics: Outliers can be removed when calculating a mean average to dampen the effects of ratings outside the normal distribution. This figure is provided as the trimmed mean. A high standard deviation can be legitimate, but can sometimes indicate 'gaming' is occurring. Consider a simplified example* of an item receiving ratings of 100, 50, & 0. The mean average rating would be 50. However, ratings of 55, 50 & 45 could also result in the same average. The second average might be more trusted because there is more consensus around a particular rating (a lower deviation).
(*In practice, some albums can have several thousand ratings)
This album has a mean average rating of 69.0/100. The trimmed mean (excluding outliers) is 69.6/100. The standard deviation for this album is 20.8.

Formulaic pop rock, it's OK but not something I would look forward to listening to. Difficult to believe there are so many hits on this. Homebound Train is the best track.

I went in ready to hate this and roll my eyes and... yes while this is very silly at parts, it is definitely not boring. Its a dumb fun record and a perfectly fine pop rock album.

The hit songs on here may never reach the popularity of the hits from Slippery When Wet, but the hits on here deserve to be hits. Everything else is good at best and filler at worst.

Alright album, but basically Side 3 and Side 4 of Slippery When Wet. Big, glossy, anthemic late-80s glam metal.

More influenced by Springsteen than the previous one, it is a good album of hard rock, with many good songs on it. Overall i prefer slippery.

A little bit more serious and mature than, slippery, with the Bruce Springsteen influence shining even more brightly this time. Enjoyable songs, and in some cases better than the previous album, but it doesn't quite have the same freshness and sense of fun that it's predecessor had. Still, not bad.

it is perfect album that contains 5 bilboard top 10 hits as a hard rock album. listen them please..

The 'cowboy junk' onn side B is a preview of the terrible Young Guns soundtrack. Otherwise, it's a decent, if unremarkable retread of Slippery When Wet.

I can understand the bad ratings, but it's a good album. A lot of the songs on this album may not be very diverse, but it has some hits and it's nowhere near intolerable.

I still remember the first time I listened to this album. I was just a little kid. It was on cassette, and it was actually the first time I heared an original album. It was such a feeling. And the same time I had curiosity and I wondered "where are 'Livin' On A Prayer', 'Never Say Goodbye' or 'Wanted Dead or Alive' ;)

Now that this kinda music is returning, after ages of being humiliated by the comittee (just as with Progressive Rock which I love), this album ranks among the finest, easily. In fact is my favourite Bon Jovi album.
At least in here EVERY song from the side 1 was a single! now that's something. And years later I knew this is the only one rock album to have 5 US top 10 hits.

The 'New Jersey' sound is really different from 'Slippery', and the songwriting evolved to a quite distinctive sound, influenced I think by Bruce Springsteen (one of Jon's heroes).
My favourite tracks are 'Born To Be My Baby', 'Blood on Blood', 'Wild Is The Wind', 'Stick To Your Guns' and 'I'll Be There For You'.

Your feedback for New Jersey